10 Things You Forgot About Triple H Vs. Vince Mcmahon: Carlito Teamed With Vince McMahon In Final Version Of Feud, Ending Of First Feud Was Another McMahon Swerve, Rehashing Rivalry Caused DX To Reunite and more

The Triple H vs Vince McMahon rivalry deserves more attention when looking back at the impact it had on the business. Everyone talks about McMahon feuding with Steve Austin when thinking back to his authority figure character. Triple H feuding with Vince played a pivotal role in him getting to the next top level joining Austin and The Rock.

WWE put a lot of time into the angle involving many other personalities joining the Triple H vs McMahon storyline. There were even some instances of the company going back to the rivalry after the original feud in the Attitude Era. Each step provided an interesting change of pace for their respective characters. Fans should take a trip down memory lane remembering the following things about the Vince vs Triple H rivalry. 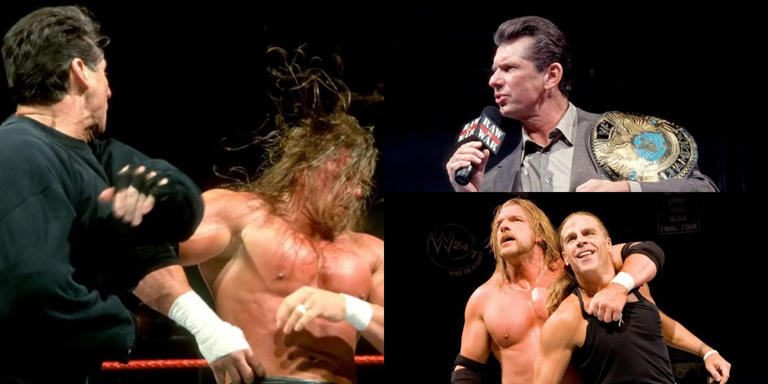 Here are the 10 Things You Forgot About Triple H Vs. Vince Mcmahon On-Screen Rivalry

Carlito Teamed With Vince McMahon In Final Version Of Feud

Another chapter of the Triple H and Vince McMahon rivalry came when an unlikely person joined the fray. Triple H’s return from an injury in 2007 featured him working with various new or old talents before moving back into the title picture.

Carlito had a short program with Triple H that stemmed from the issues between Triple H and Vince. WWE aligned Carlito with McMahon for a few weeks and even had them teaming together in a handicap match victory over Triple H on Raw.

Ending Of First Feud Was Another McMahon Swerve

Vince McMahon won the audience over as a face again during his feud vs Triple H. Keep in mind that this was just months after McMahon revealed he was the higher power for a swerve heel turn. No one believed WWE would do that again when Vince started representing The Rock vs Triple H.

This sparked the concept of all four McMahon family members representing a different wrestler in the WrestleMania 2000 main event for the WWE Championship. Vince betrayed Rock to help Triple H win for the same swerve pay off. WWE sold the issues between Triple H and Vince as being real, but Vince’s love for Stephanie united them.

The most noteworthy rivalry between Vince McMahon and Triple H came in 1999 and 2000 in a more personal manner. However, WWE chose to go back to this multiple times knowing there was some chemistry there only stronger after Triple H married Stephanie McMahon in real life.

The heel work of Vince was what WWE used to tell the story of Triple H and Shawn Michaels reuniting D-Generation X in 2006. McMahon making life miserable for Triple H not helping him against Michaels caused Triple H’s first face turn in over four years by reuniting the iconic act.

Shane Was In The Middle As Much As Stephanie

Everyone remembers the element of Stephanie McMahon being involved in the Vince McMahon vs Triple H story, but Shane had a role as well. WWE booked Shane to become a closer ally to Triple H when the Corporate Ministry ended.

Shane was the one helping Triple H cheat to win the WWE Championship during an absence from Vince after Steve Austin sent him packing. McMahon returned as a face, but Shane didn’t become an enemy until Triple H seemingly forced a marriage to his sister Stephanie. The eventual reveal of Stephanie planning it with Triple H saw Shane both at odds and making peace with them depending on the time.

Test Suffered From The Feud

The biggest under the radar story of the first Triple H vs Vince McMahon feud was how much it harmed Test’s career. WWE always saw something more in Test and trusted him to be in Stephanie McMahon’s first longer storyline as her love interest.

Triple H interrupting their marriage and revealing he married a drugged Stephanie before should have made Test his biggest rival. It was instead a chess move in the bigger Vince vs Triple H feud. Test received no revenge and rarely acknowledged Stephanie leaving him for Triple H moving back into the lower mid-card scene.

Vince McMahon was the only other WWE personality in the ring for the infamous segment of Triple H dumping Stephanie McMahon in 2002. The face turn for Triple H that year culminated with him finding out Stephanie was lying about a pregnancy and dumping during a vow renewal segment.

Triple H delivered a pedigree to McMahon before pie-facing Stephanie to end their time together. Vince took the physical damage before he and Stephanie started stacking the odds against Triple H during his WWE Championship title chase.

WWE made it feel important that Triple H was becoming a noteworthy rival to Vince McMahon. There was about a year and change of Vince being an on-screen heel, but most of his work came in a feud against Steve Austin.

Even when things changed, it always went back to Vince finding a new way to cheat Austin. Triple H was just the second wrestler to face McMahon in a singles PPV match at Armageddon 1999. Austin’s steel cage match vs Vince was the only previous time the boss had a singles match on PPV.

Vince McMahon Won His One WWE Championship From Triple H

It is rarely talked about that Vince McMahon won the WWE Championship given how many times WWE has mentioned David Arquette and Vince Russo winning the WCW Championship. Part of the reason is that Vince vacated the belt after winning it, but this still impacted the Triple H feud.

McMahon won the WWE Championship with outside help as a face shocking the heel champ of Triple H. The stunt was done to create a ratings spike and create some shock interest. Vince vacating the belt saw Triple H winning it right back in a six-person match.

One interesting tidbit in the first feud between Vince McMahon and Triple H featured Steve Austin in an unlikely scenario. Austin and Triple H feuded for the WWE Championship in the fall of 1999 shortly before Austin left for neck surgery.

No Mercy 1999 saw Vince getting involved at the start of the No DQ match to take Triple H’s sledgehammer away from doing damage to Austin. Triple H ended up winning that match when Rock accidentally hit Austin with another sledgehammer.

Were Allies Right Before Feuding

The timing of Triple H feuding with Vince McMahon came in the same year that they were technically in a same faction together. Triple H turned heel to end D-Generation X at the start of 1999 when he joined The Corporation faction led by Vince.

Quite a few twists and swerves led to them even being part of the same Corporate Ministry faction. Vince turning face later in the year and Triple H moving forward on his own during his first WWE Championship reign led to them clashing for the first time. [Sources: TheSportster]