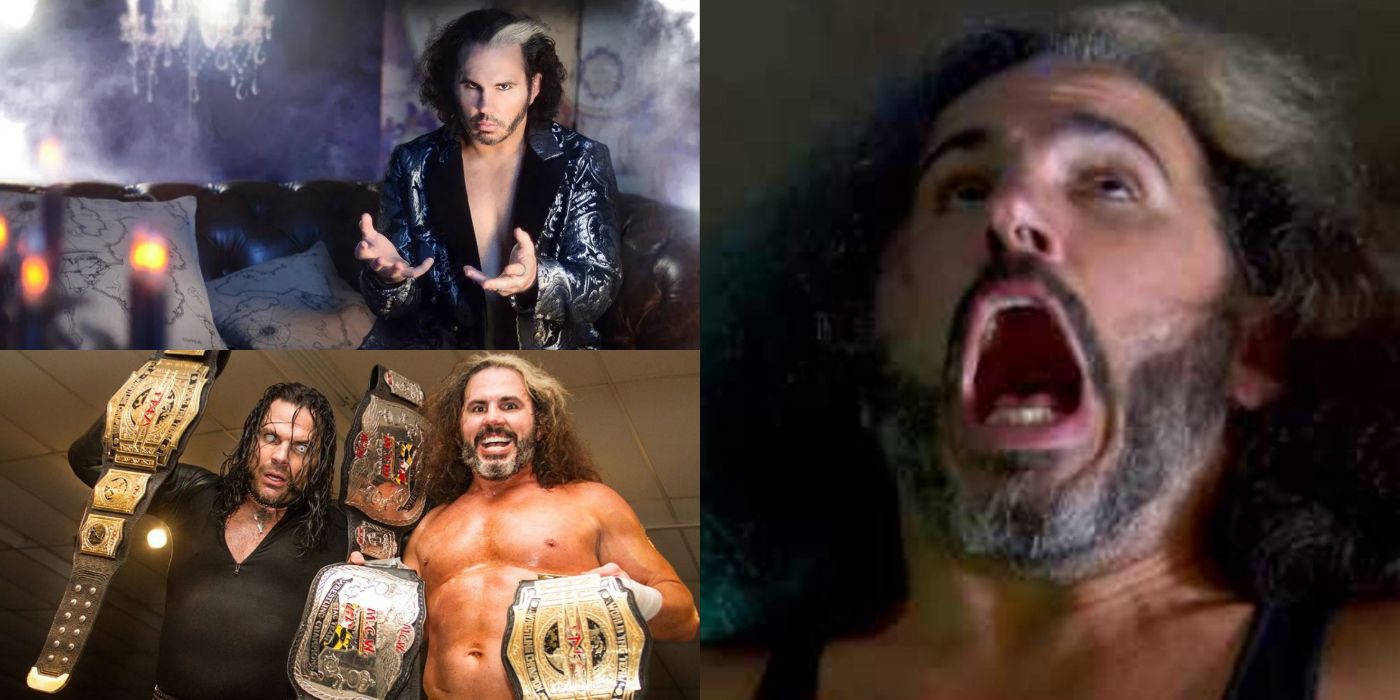 30-year veteran at this point, Matt Hardy embarked on his pro wrestling career as a teenager, establishing himself in WWE at a young age before moving on to promotions like Impact Wrestling, Ring of Honor, and All Elite Wrestling. He’s kept himself relevant over the years with a number of personas, the most recent hit being his Broken Matt Hardy character, which he debuted in Impact Wrestling in the mid-2010s.

It has since become Hardy’s most popular character, with fans regularly chanting “Delete!” during his matches. But there’s a lot about Broken Matt Hardy that fans have forgotten since, so let’s take a look at the Broken Saga across various promotions and talk about some of the finer points.

As fans know — and have cheered ever since he started saying it — Broken Matt Hardy uses the word “delete” to describe what he’s going to do with his opponents, often repeating it over and over to absurd comedic effect. Once it came up, many fans began to assume it was either a wrestling to the Cybermen from Doctor Who, who similarly use the word “delete” instead of “kill,” or the anime Death Note, in which a character named Teru repeats the phrase. However, Hardy has recently dispelled this, claiming that he settled on “delete” because he considered it a buzzword at the time.

The year 2014 saw Matt Hardy return to the Impact Zone after a run in Ring of Honor, and in 2015 he captured his first major singles world title when he defeated Ethan Carter III and Drew Galloway to capture the Impact World Championship. However, after two days Hardy would be forced to vacate the title for storyline reasons, winning it again in early 2016 by defeating EC3 for the belt. From there, he’d turn heel, drop the belt to Drew Galloway after 67 days, feud with Jeff Hardy, and then disappear from Impact television for a month.

Part of the fun of watching the Broken Matt Hardy saga unfold was seeing what bizarre thing would happen next. A couple of months after the Final Deletion, an incident occurred on Impact as Matt Hardy yanked a fan out of the crowd and appeared to bite him. In explaining the attack on Twitter, Hardy wrote “My soul, essence & #BROKEN brilliance is over 2000 years old. Ants aren’t allowed to touch MAGIC.” However, that didn’t answer fans’ biggest question: is Matt Hardy a vampire again?

Posed As An Impostor Willow

In the Hardy brothers’ younger days performing for their own promotion, OMEGA, Jeff Hardy had a number of personas, including a ghostly character called Willow The Wisp — sometimes shortened to just Willow — which Hardy portrayed on several occasions on Impact television. During Matt Hardy’s brief hiatus from Impact television, various impostor versions of Jeff Hardy’s alter ego Willow began interfering in Jeff’s matches and attacking him. During one such attack, Matt Hardy revealed himself as one of the fake Willows, and their rivalry thus continued.

The “Great War” With Decay

Following the landmark cinematic match between Broken Matt Hardy and Jeff Hardy — which Matt won — Matt Hardy and “Brother Nero,” (as he was now called) entered the World Tag Team Title picture when they won a ladder match with three other tag teams. This launched them into a feud with Decay members Abyss and Crazzy Steve for the tag belts.

At Bound for Glory, Broken Matt Hardy and Brother Nero took on Decay in a hybrid cinematic match/traditional in-arena street fight called The Great War, with the Hardys coming out victorious with the tag title, holding the belts for a 152-day run.

The Ridiculousness of “Delete or Decay”

Ahead of their Bound for Glory match, however, the Broken Hardys and Decay had a cinematic encounter called “Delete or Decay.” Not quite a match, “Delete or Decay” had Decay arriving at the Hardy Family Compound, where the expected “Final Deletion” style hijinx absurd, like Abyss entering the Lake of Reincarnation to become Joseph Parks. At one point, Rosemary tried to kidnap Matt Hardy’s son, King Maxel, and ended up spitting poison mist into Vanguard 1, the Hardys’ trusty drone.

The Hardy Compound Developed A Volcano

The popularity of the Final Deletion and the Broken Universe pretty much demanded that Impact Wrestling escalate matters by delivering an entire cinematic episode of Impact. The episode, entitled “Total Nonstop Deletion,” entirely took place at the Hardy Family Compound, which brought one of the wildest developments in the Broken Saga: that a volcano had formed at the compound. More than just set dressing, the volcano would have a role in the finish of the show’s main event.

The aforementioned finish would be one of the more absurd moments of the Broken Saga: Crazzy Steve not only fell into the volcano, but was launched out of the erupting volcano and into the ring, where Matt Hardy pinned him to end the match.

The Expedition Of Gold

In early 2017, the Hardys’ World Title reign led to what was to become the next phase of the Broken Saga. Proving dominant in the Impact Zone, the Hardys would embark on what Broken Matt Hardy called “The Expedition of Gold,” which involved venturing to other promotions — by teleportation, of course — to win additional tag team championships. However, during this run their contracts expired and the Hardys left Impact, resulting in them vacating the titles via teleportation accident.

The Legal Battle Over The Broken Universe

After Impact, the Hardys brought the Broken gimmick to Ring of Honor, but it soon became clear that their Impact Wrestling departure wasn’t under the best of terms. Not only did contract negotiations fall through, but Impact management claimed to own the Broken gimmick. A legal battle over the gimmick ensued, as the Hardys believed the amount of work and money they put into the concept themselves meant they owned it. Eventually Impact changed its policy on gimmick ownership, and Matt Hardy was able to trademark much of it.

The Deletion Continued In WWE

The year 2017 brought the return of Matt and Jeff Hardy to WWE, where they initially simply wrestled as The Hardy Boyz until Jeff got injured. As a result, Matt Hardy became a singles performer, reviving his Broken gimmick as “Woken” Matt Hardy. From there, Hardy got into a feud with Bray Wyatt, leading to a full-on Final Deletion match between the two called The Ultimate Deletion, which aired on Raw and ended with Bray Wyatt disappearing into the Lake of Reincarnation.