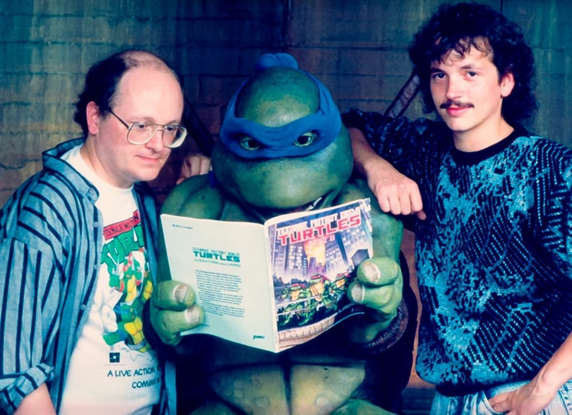 Hopefully, 20 facts you might not know about ‘Teenage Mutant Ninja Turtles’

20 facts you might not know about ‘Teenage Mutant Ninja Turtles’: It began as a comic book, In fact, the comic started as a parody, The script for the film was a mix of the comics and the cartoon, Animation could have been involved, The masters of puppetry got involved

It began as a comic book

In fact, the comic started as a parody

Given how long ago it was, and given how many TMNT properties we’ve seen, it’s easy to forget the origins of the comic. In fact, Eastman and Laird created it as a parody of the Daredevil comics. Splinter’s name is a parody of Stick from Daredevil, and the Foot Clan are a parody of the Hand.

Teenage Mutant Ninja Turtles is a bit of an origin story for the Turtles, and some aspects of the story come from the comics. However, a few things were taken from the ‘80s cartoon as well. The color-coded bandanas and the Turtles loving pizza, for example, come from the show. So does April O’Neil being a reporter.

Animation could have been involved

Who Framed Roger Rabbit had hit it big in 1988 mixing live action and animation. This idea was on the mind of the producers originally. When the film was first being conceptualized, they thought about having the Turtles be animated while everybody else was live action. Eventually, though, they scrapped that idea.

The masters of puppetry got involved

To do a live-action TMNT film, they needed actors in costumes. However, they also needed costumes with facial expressions. That meant puppetry was needed, so enter Jim Henson’s Creature Shop. Henson himself said that it was the most-advanced creature work they had ever done in the shop. The suits were made of foam rubber latex, and they took 18 weeks to complete.

One in-suit performer also got to voice his character

Puppeteers worked the faces of the costumes, but actors (and stunt doubles) did everything inside. They didn’t provide the voices, though — save for one. Josh Pais served as both the in-suit performer and the voice of Raphael. Pais has actually gone on to have a successful career as a character actor outside of a foam rubber suit as well.

A star voiced one of the Turtles

You may not know Brian Tochi, who voiced Leonardo, or Robbie Rist, who voiced Michelangelo, but we bet you know the voice of Donatello. That’s because the turtle that “does machines” was voiced by none other than Corey Feldman.

The in-suit performers got a little face time as well

All four in-suit performers among the Turtles got small roles on screen as well. None of them are more than cameos, but fittingly, Michelan Sisti, who played Michelangelo, played a pizza delivery guy.

April O’Neil got a little help from a true legend

Judith Hoag was cast as April, but she didn’t really know anything about the Turtles — be it the comics or the cartoon. Fortunately, she had help on the set of Cadillac Man, which she was shooting when she got the news of her casting. Hoag was making that movie with Robin Williams, who was a huge fan of the comic. Williams got Hoag up to speed for her role.

A future star had a role

The Foot Clan mostly wear masks, but the character known as “Head Thug” doesn’t always wear a mask. That’s good, because otherwise we wouldn’t be able to look back and realize we were watching a future star. The unnamed Head Thug is played by none other than Sam Rockwell.

They mostly shot down South on the cheap

The suits could be pretty miserable

Unsurprisingly, spending all day filming in full-body latex suits was not always easy. Ernie Reyes Jr., who worked as a stunt performer as Raphael, said he had to drink a gallon of water a day while filming to avoid dehydration. Pais had it particularly rough, as he was claustrophobic and rushed to take his head off the second the director called cut.

The Turtles live down in the sewer, and to get down there, you have to go through a manhole. This provided a challenge to the production team. They intended to build a small room underground that the actors could use to go in and out of the sewers through the manholes. However, the room was to be eight-feet deep, and they found water at five feet. That means they then had to pour concrete into the room to keep the water out.

The director was gone by the end

Teenage Mutant Ninja Turtles was directed by Steve Barron. It was his second feature after the small movie Electric Dreams, which came out in 1984. According to Brian Henson, Jim’s son who also worked at the Henson Workshop, the film was largely put together in post-production with Barron mostly not involved.

One of the most famous film editors got axed

Editor Sally Menke worked on the movie, though her time on the project was limited. Production company Golden Harvest fired her because they didn’t like her work. Menke turned out just fine. She edited every single one of Quentin Tarantino’s films until her untimely passing in 2010.

They had a hard time finding a distributor

Golden Harvest probably figured getting a Teenage Mutant Ninja Turtles movie distributed wouldn’t be a problem. After all, there was already a popular cartoon and a popular toy line. The problem? Masters of the Universe, a movie with a similar background that flopped. Disney, Columbia, Warner Bros., Paramount, and Orion all passed on the movie. In the end, New Line Cinema agreed to distribute it. The independent production company had mostly released B movies and arthouse flicks.

Thanks to the cartoon, the Turtles were synonymous with pizza. To promote the movie, Pizza Hut was part of a $20 million marketing campaign for Teenage Mutant Ninjas Turtles. This was perhaps a bit surprising. In the film, it’s Domino’s that got all the product placement.

The United Kingdom had a weird thing against martial arts

For some reason, the U.K. had problems with martial arts and weaponry from the Far East. The British version of Teenage Mutant Ninja Turtles would not allow Michelangelo’s nunchaku shown at all in the film, for example. There was precedence for this, as the cartoon’s name had actually been changed to Teenage Mutant Hero Turtles, and indeed the song “Turtle Power!” from the film was edited to remove the word “ninja” as well.

It was a record setter at the box office

It got two direct sequels

The massive success of TMNT quickly led to a sequel, Secret of the Ooze, which featured Vanilla Ice. There was then a third film where the Turtles traveled through time. That would be the end of this live-action, puppet-heavy series of movies, though more films starring the Turtles were to come.

20 Facts You May Not Know About ‘Teenage Mutant Ninja Turtles’

They are heroes in the half shell. They have been on TV shows, movies, and have sold millions of toys. They are the Teenage Mutant Ninja Turtles. Following the success of an ’80s children’s animation show, they decided to make a live-action movie starring the ninja turtle quartet in 1990. Donatello makes machines. We make trivia about movies that you may not know. Turtle power!