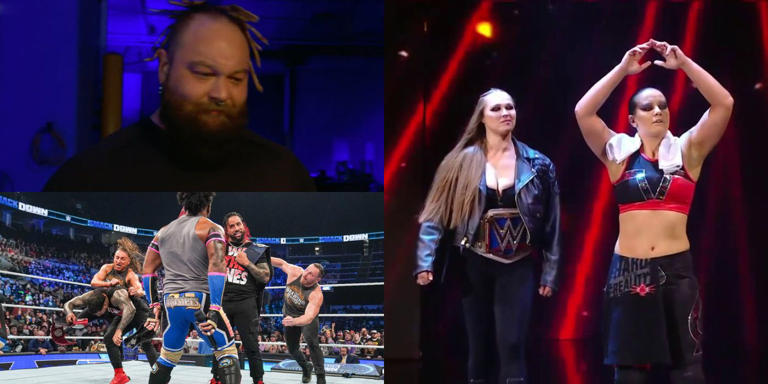 This week’s episode of WWE Friday Night SmackDown wasn’t bad, but it wasn’t extraordinary either, let’s just say it was average. Some interesting things happened, but admittedly, it felt like nothing more than a filler episode before the Crown Jewel pay-per-view.

We had a great main event between Gunther and Rey Mysterio. Bray Wyatt had another weird segment, Jey Uso and Sami Zayn still aren’t getting along, and it looks like Ronda Rousey and Shayna Baszler are going to work together.

So, without further ado, here are nine things fans need to know about this week’s WWE SmackDown.

Omos had already sent several messages to Braun Strowman, crushing anyone who got in his way, but now it was Strowman’s turn to respond.

“The Monster of All Monsters” ran over five men and proceeded to destroy Omos’ manager, MVP. He showed no mercy and finished him off with a Running Powerslam to let Omos know what awaits him at Crown Jewel.

We still don’t know what’s going on with Bray Wyatt and what we saw this week maybe it’s another one of his personalities, or maybe he’s just crazy. Wyatt was cutting a backstage promo when a WWE worker interrupted him.

That made Wyatt very angry, he lost his cool and started yelling at the poor man, telling him that he wanted to rip his head off and that he hated himself, and finally demanded that he apologize. The very frightened man had no choice but to apologize. All this happened while images of Uncle Howdy flashed on and off.

Non-title women’s feuds have never been common in WWE, but it looks like that is starting to change under the creative direction of Triple H. In addition to Liv Morgan versus Sonya Deville, it looks like newcomer Emma and Xia Li started a program.

Emma was being interviewed when Li showed up to tell her she was weak. Emma then proceeded to shut Li’s mouth with a right hand.

The main event featured Intercontinental Champion Gunther taking on Rey Mysterio. Truth be told, everyone knew Gunther was going to retain the title, but still, the match was quite entertaining and Rey Mysterio had a couple of clear opportunities to defeat the champion.

Also, Rey surprisingly kicked out of a Powerbomb, but then Gunther hit a powerful Lariat to defeat Mysterio and retain the title. The small man vs. giant dynamic worked pretty well here, and they delivered a very good match, earning the “this is awesome” chants.

The match was solid, both men looked good and executed great moves. The ending could have been better, though, as LA Knight cheated and won via roll-up, which felt rather anticlimactic. This is LA Knight’s second win on the main roster.

This week’s episode of Friday Night SmackDown kicked off with a No Disqualification match between Liv Morgan and Sonya Deville. Liv debuted her new crazy persona a couple of weeks ago, attacking Sonya backstage. Last week we saw some major character development from Liv, though she didn’t care about the outcome of the match.

On this occasion, Morgan defeated Deville in an interesting match, which had some brutal spots. It’s admirable how Liv Morgan changed her attitude in just a few weeks, moving to putting her body on the line to entertain the fans like she’s never done before in her career.

Shayna Baszler defeated Natalya in a short and decent match. But the most interesting thing was that Baszler was accompanied by the SmackDown Women’s Champion Ronda Rousey. We know Ronda and Shayna are friends in real life and have expressed that they would like to work together.

Maybe this means nothing, or maybe this could mean that Rousey and Baszler will join forces, and who knows if they start a faction or go for the Women’s Tag Team Titles. It’s worth mentioning that after the match Rousey said something to Shayna, and the latter then seemed to break Natalya’s nose.

The Usos were cutting a promo, saying that after defeating The Brawling Brutes at Crown Jewel, they would become the longest-reigning tag team champions ever. Then The New Day came out and told them that whatever happens in Saudi Arabia, they would be next in line, mostly to try to keep them from breaking their record.

Then Butch and Ridge Holland attacked the Usos from behind as New Day left. But Sami Zayn and Solo Sikoa showed up to save the day and clear the ring.

The Viking Raiders Are Coming

For several weeks we have been seeing vignettes of the Viking Raiders and a mysterious woman, who is probably Sarah Logan.

It may be boring for some to see the same kind of videos without any clear revelations, but the fact that there is so much emphasis on the Viking Raiders could mean that they will play an important role in the future.