There are plenty of managers and valets running throughout the world and history of pro wrestling, but sometimes people could use a hype man, too. Whether it’s a bodyguard or a heater happily agreeing with everything their charge says, there have been plenty of sidekicks in WWE.

Every Batman needs a Robin and plenty of wrestlers need a sidekick to help complete the package. The WWE has had practically a battle royal’s worth of sidekicks, so it’s only normal that fans have forgotten about some of them. 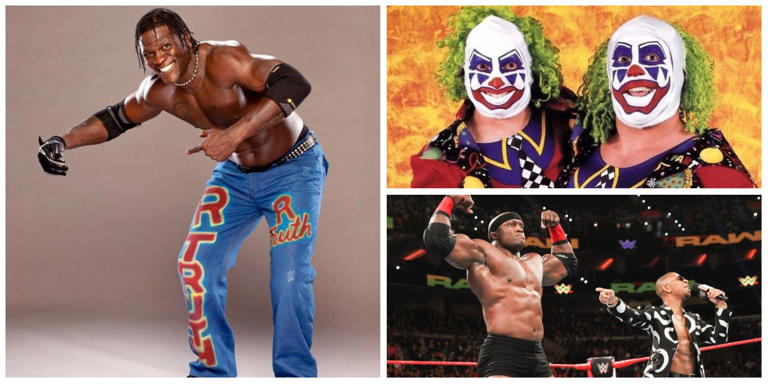 Here are the 9 WWE Sidekicks You Totally Forgot

Normally, having an imaginary frenemy be a sidekick wouldn’t get on a list like this. But when R-Truth is one pulling Little Jimmy’s strings it’s just too good to pass up. First, we were all “Little Jimmies,” when Truth was feuding with John Cena (maybe since we couldn’t see Cena, that’s why we couldn’t see Jimmy?). Then, when Truth became a lovable babyface again, Little Jimmy began “showing up” in pictures on WWE.

For nearly a decade, Hornswoggle was the WWE’s resident little person. When he was done being a Leprechaun, he started teaming with 3MB.

He even completely changed his look to look more like a diminutive roadie than a Leprechaun. Alongside 3MB, Swoggle took part in the way better than expected Wee-LC match, against fellow little person, El Torrito.

Ol’ no chin himself, James Ellsworth technically goes down in WWE history as the first ever and (thankfully) only male winner of the Women’s Money In The Bank. He gifted his prize to Carmella and spent months lallygagging after the Princess Of Staten Island. There are plenty of men who couldn’t blame Ellsworth even if they tried, especially after ‘Mella started leading him on by finding him uniquely attractive.

Kevin Nash has become an absolute legend in the industry. After a few laughable stints in WCW, a chance viewing by Shawn Michaels brought him to WWE. Many fans forget that before his WWE Championship run as Diesel, he arrived in WWE as Shawn Michaels’ bodyguard.

The two were inseparable for nearly a year, where Big Daddy Cool won every title that was able to be won. Once HBK got jealous of Diesel’s success, that was the end of their initial on-screen friendship. Diesel had outgrown the sidekick gig and Michaels wasn’t going to play second-fiddle to anyone.

As one of the most controversial Divas of all time, The Kat started out as a sidekick for Debra, another valet for Jeff Jarrett. The two ladies would yell at ol’ Double J whenever he accosted another lady and locked them in the Figure Four. But once Jarrett lost The Good Housekeeping Match and headed for WCW, she paired up with Chyna instead. She moved on from wearing power suits and matching Debra to wearing black leather like her new friend Chyna had done.

Doink was the sum of what happened when you paired up the wrestling skills of second-generation superstar Matt Borne with a demented take on the already twisted Krusty The Clown. For a brief moment in time, Doink had all the makings of a huge character heel. But as more and more fans cheered him, the WWE paired him up with his own sidekick, Dink The Clown. The two immediately began pulling pranks on the likes of Bam Bam Bigelow, setting up their mixed tag match at WrestleMania 10.

When the cheers come organically, you know you’ve got something. Damien Sandow was treading the “Creative doesn’t have anything for you” waters when he started following The Miz around. He would become The A-Lister’s Stunt Double and like any good superstar, he made the most of the situation.

As any good stunt double does, Mizdow spent time mining what The Miz did both in and out of the ring. Sadly, he isn’t really remember by fans today.

When is a paid employee a sidekick? When he’s paid to be as much! Virgil can spend as much time as he wants at empty convention tables, trying to convince fans that he was a major part of the nWo, but we really know what made Virgil so famous. He spent the bulk of his WWE run as The Million Dollar Man’s paid lackey. He might not have always liked it, but probably got paid handsomely for doing degrading things like massaging DiBiase’s feet.

Right now, The Almighty Bobby Lashley is cooking on all cylinders and doing it all on his own, but some WWE fans may have forgotten that he wasn’t above using a hype man.

Most recently it was MVP, but several years ago, he was using The M.O.T.H. – the Man Of The Hour, Lio Rush. Lio had all of the tools to be very special in the company, but unfortunately he wasn’t able to soar nearly as high.

9 WWE Sidekicks You Completely Forgot About