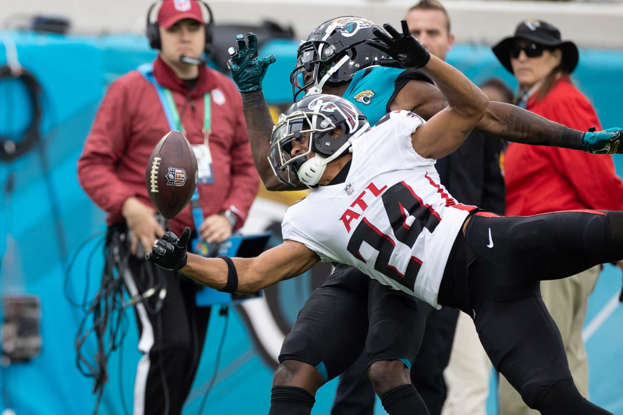 These are the best non-QBs from each of the 32 NFL teams entering 2022.

McLaurin has been highly productive in three NFL seasons despite major inconsistency at quarterback. He has recorded more than 1,000 receiving yards in consecutive years and expects more significant numbers with Carson Wentz under center this year.

Henry showed the first sign that he was human last season, missing nearly half the year with a foot injury. He still averaged more than 100 rushing yards per game when he played, nearly reaching 1,000 yards in eight games. Henry is looking to get back on track after rushing for over 2,000 yards in 2020.

Evans deserves a lot of credit for playing at an elite level, regardless of the quarterback in Tampa Bay. He has recorded more than 1,000 yards in his eight NFL seasons and made his fourth Pro Bowl last year. Since Tom Brady joined the Bucs, Evans has also scored 27 touchdowns.

The Seahawks have lost a lot of talent recently, but Metcalf remains on the roster. He has racked up more than 900 yards in each of his three NFL seasons and made the Pro Bowl in 2020 with 83 receptions for 1,303 yards and 10 touchdowns.

Bosa successfully bounced back from a serious injury in 2020, contributing 15.5 sacks and making his second Pro Bowl in three years last season. He continues to lead an excellent defense in San Francisco.

Watt, the reigning NFL Defensive Player of the Year, is clearly out of the shadow of his brother J.J. He led the league in sacks in consecutive seasons, posting 22.5 sacks in 2021. Watt was also an All-Pro in three straight seasons.

Kelce continues to play at an elite level in his mid-30s. One of the leaders of a loaded Eagles roster, he has been an All-Pro in four of the last five seasons as one of the elite offensive linemen of his generation.

The Jets’ defense is one of the worst in the league, but Williams is a clear gatekeeper. The former first-round pick has 13 sacks over the past two seasons as a top interior pass-rusher.

Williams has displayed surprising inconsistency during his career, though he has had back-to-back solid seasons with the Giants. He had 11.5 sacks in 2020, followed by 6.5 sacks last season.

Lattimore is arguably the best player on the Saints’ excellent defense, with four Pro Bowls in his five NFL seasons. He is coming off a breakout 2021 season in which he recorded three sacks and 68 tackles.

Judon made a considerable contribution in his first season as a Patriot after coming over from Baltimore. He was able to make his third straight Pro Bowl after posting 12.5 sacks and 60 tackles.

Jefferson’s first two seasons in the NFL are unlike anything the league has seen before. He already has more than 3,000 receiving yards, along with 17 touchdowns. Not surprisingly, Jefferson has made the Pro Bowl in both of his NFL seasons.

Hill has shown otherworldly speed during his time in Kansas City, and has brought his talent to South Beach after an offseason trade. A Pro Bowler in his six NFL seasons, Hill had a career-high 111 receptions last year and has contributed more than 1,100 receiving yards in four of the past five years.

Donald makes an argument as the best defensive player in league history, and it continues to add to his resume. The three-time Defensive Player of the Year has an impressive 98 sacks in eight seasons with the Rams, and has been a first-team All-Pro seven straight years.

Bosa has been an incredibly productive pass-rusher since the Chargers drafted him in 2016. He has made four Pro Bowls with 58 sacks in his career, including 10.5 sacks last season. Bosa will get some help this season by adding Khalil Mack on the opposite side of the defensive line.

Adams’ addition is welcome in Las Vegas, as he reunites with college teammate Derek Carr. The former Packers star has made five straight Pro Bowls and was an All-Pro in each of the past two seasons. . He had arguably his best season in 2021, with 123 receptions for 1,553 yards and 11 touchdowns.

The Chiefs’ roster is still packed with talent, but it’s hard to beat Kelce’s production. He is on a historic streak with six straight 1,000-yard seasons and has made the Pro Bowl seven straight years. Somehow, Kelce is close to stealing the honor from Tony Gonzalez as the best tight end in Chiefs franchise history.

The struggling Jaguars showed Scherff the money in the offseason after seven seasons in Washington. He has struggled to stay on the field, but has made five Pro Bowls in his seven NFL seasons.

Nelson is arguably the best guard in the NFL, making the Pro Bowl in all four of his seasons and earning first-team All-Pro three-team honors. He has done a great job opening up holes for the Colts’ elite running game led by Jonathan Taylor.

Cooks has the most impressive record of any player on the Texans’ roster. Despite never making a Pro Bowl, he has six 1,000-yard seasons in his eight years in the NFL.

Alexander played only four games last season due to injury, and his return will be a huge boost for the Packers’ defense. He was a Pro Bowler in 2020 as an elite coverage corner.

The Lions are still in a clear rebuild, but they got a nice boost from St. Brown in his rookie season. The fourth-round pick had 90 receptions for 912 yards and five touchdowns.

The Broncos have a solid roster despite their recent lack of success, with Simmons leading the way defensively. He was a Pro Bowl player in 2020 and a second-team All-Pro in two of the last three seasons, registering 14 interceptions during that time.

Parsons outclasses elite offensive players like CeeDee Lamb, Tyron Smith and Zack Martin, along with All-Pro cornerback Trevon Diggs, after a historic rookie campaign. He is shaping up to be the Cowboys’ defensive centerpiece after posting 84 tackles and 13 sacks last season.

Garrett is arguably the best defensive player in football and a consecutive All-Pro. He had a career-high 16 sacks last season and has double-digit sacks in four straight years.

Chase had a historic rookie season, winning Offensive Rookie of the Year in the process. The former LSU star finished with 81 receptions for 1,455 yards and 13 touchdowns during the regular season and helped lead the Bengals to the Super Bowl.

Without Khalil Mack, Smith is the new leader of the Bears’ defense. He was a second-team All-Pro in each of the past two seasons, with a staggering 163 tackles last year. However, his status as the best player could be short-lived after demanding a trade during training camp.

McCaffrey would have an easy case as the Panthers’ best player if he could stay healthy. It’s still easy to remember his story, the 2019 All-Pro season in which he had nearly 2,400 scrimmage yards and 19 touchdowns, though McCaffrey has played a total of 10 games the past two seasons.

Buffalo has a star-laden roster, though Diggs has a strong case as its best player not named Josh Allen. He has made the Pro Bowl in both of his seasons with the team, with more than 2,700 receiving yards and 18 touchdowns since he joined the team. The Bills also have stars on defense to rival Diggs, including Ed Oliver, Von Miller, Tremaine Edmunds, Jordan Poyer and Tre’Davious White.

Humphrey was one of many notable Ravens to miss time due to injury in 2021, but he hopes to get back on track this season. The star corner was a Pro Bowler in 2019 and 2020, and he has nine picks in his five NFL seasons.

The Falcons are on a rebuild, and they seemed to get it right with their 2020 first-round pick, Terrell. He was a second-team All-Pro last season, and has already established himself as an elite coverage corner.

With apologies to future Hall of Famer J.J. Watt, Baker is the best and most consistent player on the Cardinals’ defense. The safety is a four-time Pro Bowler and a two-time All-Pro in five seasons as one of the elite safeties in the NFL.

Best non-QB on all NFL teams

The quarterback is the most important player on the football field, but it takes a very talented team to make a champion.

Top 8 Non-QBs on Every NFL Team (With Image)