Bryan Danielson (also known as Daniel Bryan in WWE) has one of the greatest wrestling stories of all time. He’s gone from the ultimate underdog to a veteran star who is helping keep AEW’s roster intact despite the seemingly endless drama looming over the company in 2022. Danielson is not only a wrestling veteran, he’s also still one of the best technicians in the ring even now. in his 40s

Danielson has a career that spans many different wrestling promotions and hundreds of great rivalries. He has been a world champion in multiple promotions and still seems destined to be AEW Champion one day. He has crossed paths with many wrestlers on multiple occasions and this list will examine the 10 wrestling superstars that Bryan Danielson has faced the most during his illustrious career as a wrestler. 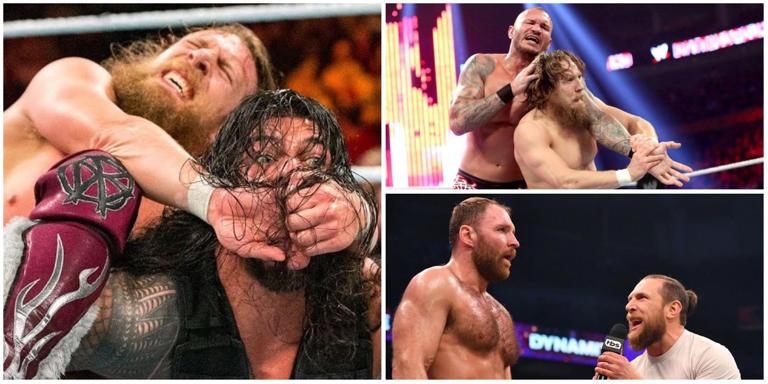 Here are the 10 Best Wrestlers He Has Faced the Most

Big Show and Daniel Bryan feel like they exist in two different eras of wrestling. Interestingly, the two have competed in 67 different matches throughout Daniel Bryan’s career. They had multiple World Heavyweight Championship matches when Bryan was a champion in 2012. The two also clashed a few times in 2015 including the last singles match of their career which occurred on an episode of Raw.

Cody Rhodes and Daniel Bryan first clashed in the ring on an episode of SmackDown in 2011. The pair would continue to have matches at the company until 2015 when they competed for the Intercontinental Championship at WrestleMania 31.

In the span of over four years, Bryan and Cody competed in 61 different matches. Rhodes and Bryan are pretty split on the victories with 25 of their bouts going to Cody and Danielson winning 36.

Although John Moxley and Daniel Bryan are now two of the faces of AEW, the two have a long history that dates back to their time in the WWE. Between the two companies, Bryan and Moxley have crossed paths 80 different times.

Their most recent match on an episode of AEW Dynamite was for the AEW World Championship. The pair have matches that predate their time in the WWE as well. In fact, the first time the two men ever crossed paths in a ring was at Mad Pro Wrestling in 2007.

The union of Kane and Daniel Bryan, Team Hell No, helped bring a new layer to the decorated character that Daniel Bryan already was in the WWE. Although most fans associate Kane with Bryan as a tag team partner, the two clashed in the ring many times as opponents.

As early as 2012, the two had been competing on episodes of SmackDown. They would have 76 more matches as opponents. The pair would eventually become tag team champions and had their last tag match at Extreme Rules 2018.

Randy Orton will always have a special place in the career of Daniel Bryan since he was the person who put him over at WrestleMania 30. Although that match is one of the most well-known of Daniel Bryan’s career, he and Randy Orton had 78 matches against each other in the WWE.

Their first bouts date all the way back to 2010. The two would continue to cross paths throughout Bryan’s long WWE career. They had their last official match on an episode of Raw in 2014. The 27-minute bout ended in a victory for Daniel Bryan.

“The Tribal Chief” and Daniel Bryan have been foes ever since The Shield first debuted in 2012. Team Hell No was one of the first major foes that rivaled The Shield. Bryan would continue to have problems with Reigns throughout his career at the WWE.

The two have competed numerous times on Raw and also main-evented WrestleMania 37 with Edge. Roman Reigns is also the last person that Daniel Bryan ever wrestled in the WWE. His loss on SmackDown to Roman led to the end of his WWE career in 2021.

Daniel Bryan was an integral part of helping The Shield become established as one of the top stables in the WWE. Of all three members of the faction, the person that crossed paths with Bryan the most is Seth Rollins. Interestingly, not only have Bryan and Rollins crossed paths in the ring multiple times, Daniel Bryan has never competed against anybody more times than Seth Rollins.

The two had multiple matches when Bryan was a part of Team Hell No and crossed paths many times when Rollins was a mid-carder. After 108 different matches in the ring, Bryan bested Rollins 91 times.

Sheamus has been a thorn in Daniel Bryan’s side since 2010. The two competed for the United States Title and eventually became opponents for the World Heavyweight Championship in 2012. With 91 matches between the two of them, fans might assume that the two have a storied rivalry full of back-and-forth moments, but, overall, Sheamus has been an absolute force against Daniel Bryan. Of their 91 matches, Daniel Bryan has only managed to win 22 of them. His overall career-winning percentage against Sheamus is 24.2%.

An unlikely name that fans may not remember had many matches with Daniel Bryan was Ted DiBiase Jr. The two first battled all the way back in 2007 while both wrestlers were competing at NOAH Wrestling in Japan.

They started competing in the states in 2010 and continue to battle multiple times over the years, both as single superstars and while Ted DiBiase was a member of Legacy. They had their last singles match in 2011, but throughout their rivalry, Daniel Bryan crossed paths with Ted DiBiase 62 different times.

Daniel Bryan has admitted before that he’s not a fan of the Miz. Although the two have their own issues outside of the ring, they competed many times throughout their WWE careers.

In fact, The Miz tagged with Daniel Bryan in one of the first matches of his career on the third episode of NXT. The two would have multiple bouts for the WWE United States Title in 2010 and also competed for the Universal Title in 2019. Their Intercontinental Championship bout on an episode of SmackDown in 2019 was the last singles match of their rivalry which features 71 matches. [Sources: TheSportster]

Bryan Danielson: The 10 Best Wrestlers He Has Faced the Most