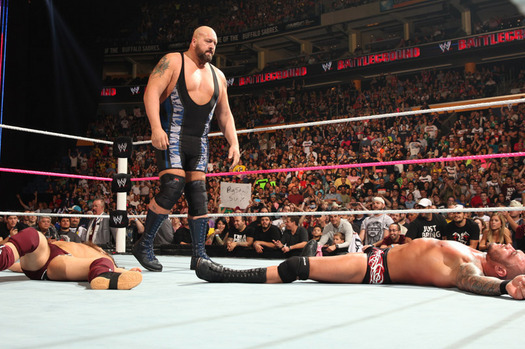 It’s hard enough trying to win wrestling matches when the other guy is whipping you, but what about when they’re actually literally whipping you? Texas Bullrope, Caribbean Strap, Dog Collar, just normal Strap combinations – they are all the same, more or less. Two men united for whatever the match is, and they have to pummel each other until one can barely stand while the other touches all four ring posts in succession. Sometimes the way to win is just pinfall or submission, and the strap is just a weapon.

After seeing the welts and red marks on the competitors’ backs and chests, it’s easy to see why this match is heralded for its sheer brutality and is rarely seen. No matter what holds competitors together, here are the best “strap” matches in WWE history. 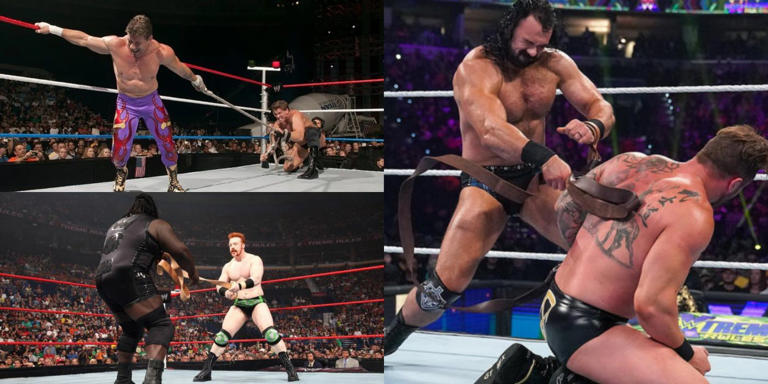 It’s always great when a pro wrestling feud gets intense enough that it escalates to a match that includes an extra stipulation, and one of the more promising gimmicks for in-ring violence is the strap match. The idea of two opponents who hate each other being physically tied together is indelible and has resulted in some awesomely brutal matches over the years. While it often comes off as an old-school territory wrestling gimmick, WWE has used it countless times, including several after this list was originally written. Let’s take a look at some more of WWE’s many strap matches, including variations where the wrestlers used chains or rope instead.

Cryme Tyme were one of the more enjoyable tag teams of the PG Era, but a string of embarrassing losses led Shad Gaspard to turn on his partner, JTG. Their sadly forgettable breakup angle culminated with an easily forgettable strap match at 2010’s Extreme Rules, with JTG coming out on top. However, the break-up of Cryme Tyme was a questionable creative choice and — even worse — their pay-per-view strap match lasted less than five minutes, making for a pretty weak climax to a breakup feud.

These days, Sheamus has enjoyed a number of hard-hitting classics with opponents like GUNTHER and Drew McIntyre, but in the previous decade he had some surprisingly disappointing bouts, like his Extreme Rules strap match with Mark Henry. Both Sheamus and Henry are intense competitors, but this by-the-numbers strap match did not deliver where it should have. To make matters worse, the ring had lights attached to the turnbuckles to signal how many turnbuckles a competitor had touched, making the whole affair look cheesy.

Over the course of his legendary career, “The American Dream” Dusty Rhodes competed in over 150 strap matches, including variations like the Texas Bullrope match, where the strap was exchanged for a rope. In fact, Dusty’s last match ever was a Texas Bullrope Match against Randy Orton during the latter’s “Legend Killer” phase.

With simple pinfall or submission rules rather than the “drag the opponent to all four corners” rule, the bout promised a violent affair, but Randy got a fairly decisive win in less than six minutes.

Ever since he returned to WWE in August of 2022, Karrion Kross (and Scarlett) had been targeting Drew McIntyre, leading to Kross’ first big match on the main roster: a strap match with “The Scottish Warrior” at Extreme Rules. Not the best match of their feud to date, this midcard bout pay-per-view bout saw Kross getting the upper hand over McIntyre thanks to interference from Scarlett with a can of mace. It was a fine opening salvo that led to a bigger steel cage match at Crown Jewel a month later.

The war of words between “The American Dream” Dusty Rhodes and the Superstar Billy Graham was certainly one for any era. This match was one of several between the two legends. As you might expect by today’s standards, there isn’t a lot of action in the match, but both men getting color and smashed with the cowbell helped make this brief encounter and the rubber match between them memorable.

The traditional chain match added the newer lights to each post to the match. Rusev challenged John Cena’s US title in a brutal Russian Chain Match. Each corner of the ring had a green light (Cena) and a red one (Rusev).

It added a visual flair to the match, which ended with both men touch all three corners and having to struggle against each other to get to the fourth. Rusev got dropped with the AA, allowing Cena to touch the last post.

The end of Extreme Rules 2009 saw CM Punk successfully cash in his second Money In The Bank briefcase against Jeff Hardy. But, earlier on in the evening, he had to ensure the onslaught of Umaga in the Bulldozer’s match — a Samoan Strap Match.

Several times throughout the match, Punk had two of three corners touched before Umaga started whipping him. However, Punk finally nailed the GTS at the fourth corner and won the match.

You could always count on The Undertaker and Brock Lesnar to have a brutal knock-down-drag-out contest. While they weren’t attached to each other, they did wrestle the first, and, so far, only Biker Chain Match at No Mercy 2003.

Despite Russo being nowhere to be found, the chain was on a pole, and the first one to get to it could use it. The two brawled throughout the match. Thanks to chicanery from both the FBI and Vince McMahon, Lesnar was able to grab the chain and use it to retain the WWE title.

WWE’s resident serial killer/caricature artist Dexter Lumis has competed in a couple of strap matches during his time with WWE. One was a forgettable affair with Roderick Strong in the summer of 2020, but he closed out the year feuding with loud hillbilly millionaire Cameron Grimes. After a “Haunted House of Terror” match in October didn’t put Grimes away for good, the two had a strap match at TakeOver: WarGames 4 in December, with Lumis once again coming out on top.

The WWE had a big task on their hands in “depowering” the Fiend after he obliterated Seth Rollins for two straight months, becoming the Universal Champion in the process. Enter Daniel Bryan. The American Dragon was targeted and challenged by the Fiend.

Bryan concluded that the only way to stop Bray Wyatt was to strap himself to the Fiend at the 2020 Royal Rumble. Despite there being no way that the Fiend was going to be stopped before WrestleMania, Daniel Bryan was still able to make fans believe that he was going to once again pull off the impossible.

No count-outs or DQ’s (except if one of the competitors removed himself from the Bullrope). In this traditional Bullrope match, you just had to deliver an old school beating to your opponent, enough to drag them around to all four corners of the ring.

But there wasn’t any rule as to which body part bits the post first. As the match was tied up at three posts, JBL attempted to keep Eddie Guerrero from leaping over him to touch the fourth. Unfortunately for Eddie, he wound up splashing the big Texan into the last post, giving him to the WWE title.

The Rock and Triple H have always been on opposite sides of the same coin. They rose to the top together and fought nearly every match against each other at some point in their careers. At Fully Loaded 1999, Triple H was incensed with become the WWE champion and had forsaken everyone, DX, the Corporation, Chyna — anyone and everyone in his pursuit to be the man, the Game.

Triple H and the Great One were tethered to a strap with the # 1 Contender slot on the line. Despite seemingly not caring about his former friends, both Billy Gunn and Chyna helped Triple H win the match, setting up the brief Gunn/Rock feud and giving Triple H a shot at SummerSlam to win the gold.

Stone Cold Steve Austin and several other wrestlers over the years have credited Savio Vega with helping them to find their footing in the WWE. Austin and Vega did battle in a fantastic Caribbean Strap Match as part of In Your House: Beware of Dog. In one of the best match endings you’ll see, Austin seemingly had the match wrapped up, dragging Savio around by his neck while touching the corners—but the Million Dollar Champion didn’t realize that the Caribbean legend was also touching the corners. It led to a big race at the end that Savio won, and, per the match stipulation, sent Ted DiBiase packing. [Sources: TheSportster]