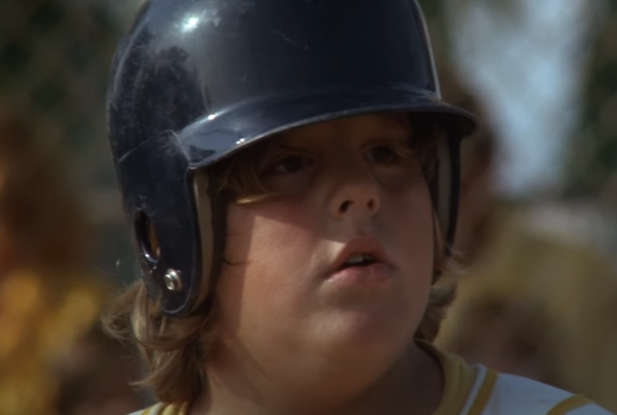 Kelly Leak (Jackie Earle Haley) was the resident bad boy on the Bears who also happened to be the best player in the history of the North Valley League. He was hitting .841 at one point during the Bears’ run to the championship game in ’76. Once we got through Leak’s tough exterior, we learned that he’s somewhat of a tortured soul longing for acceptance. He also had a motorcycle and could drive a van, which came in handy when needing to drive from California to Texas. He was quite the international star.

2. Henry Rowengartner (‘Rookie of the Year’)

The young phenom from the 1993 comedy with the really, really tight tendons following an arm injury is one of the most beloved fictional pitchers in the history of the Chicago Cubs. Only a sixth-grader, Henry (Thomas Ian Nicholas), whose pitches are like lasers because of his recovery, might be one of the most popular figures — real or fake — in the storied history of the Cubs. The character is still celebrated at Wrigley Field each season, and there’s a good chance a fan will be roaming the Friendly Confines on game day with a “Rowengartner” home jersey.

The greatest player in the history of that Southern California neighborhood sandlot. “Benny the Jet” can play anywhere on the diamond. Rodriguez (Mike Vitar) is a five-tool player and a handsome lad. According to The Sandlot lore, Benny eventually finds his way to organized baseball and makes it all the way to the majors. We assume he enjoyed many good years in the big leagues and still had his speed right to the end of his career.

Every team has that off-color, non-PC teammate who will have plenty of soundbites bleeped out in today’s media world. In the 1970s, that wasn’t necessarily the case. Tanner Boyle (Chris Barnes) certainly suffered from a Napoleon complex. Umpires and the opposition were truly the enemies, but Tanner played hard. Despite his mouth, he would do anything for the team and wasn’t afraid to call a player out or light a fire beneath an underachiever.

We’ve already showcased a pair of fictional female stars of the diamond. But Amanda Wurlitzer (Tatum O’Neal) is the queen. She might be young but is as wily as they come in terms of mound presence. Amanda can mix pitches with the best of them, and her off-speed stuff is knee-buckling at times. Wurlitzer has been known to doctor up the ball every now and then, but she’s always clever about it. Perhaps the only thing that might get in the way of her pitching progress is a side job selling maps of movie stars’ homes.

Let’s get this out of the way. Technically, the stars of this beloved 1993 coming-of-age baseball comedy weren’t officially part of a Little League team. But make no mistake, they were a team that was good enough to take down an organized youth squad (the arrogant Tigers). “Ham” (Patrick Renna) is the resident trash-talker with a powerful bat. He’s the main source of comedy at the sandlot. He’s good for bringing the snacks and making S’mores at team functions.

It’s not often that a kid goes from Little League to the front office of a major-league club. That’s what happened to 12-year-old Bill Heywood (Luke Edwards) after his grandpa and owner of the Minnesota Twins died and left the team to his grandson. In addition to owning the club, Billy eventually took over as a manager. Far-fetched? Of course. But baseball is a game for dreamers with plenty of magical moments.

There’s no rule keeping a Little League player from becoming a political activist. In 1987, with this underrated feature, 12-year-old Chuck Murdock (Joshua Zuehlke) refused to take the field for his Little League team in protest of nuclear weaponry. He causes his club to forfeit a game, but Chuck becomes a hero for the cause. He inspired some professional athletes, notably basketball star Amazing Grace Smith (NBA legend Alex English), to follow in his protest footsteps.

Mitch (Wiley Wiggins) might seem like the odd freshman, but he was a solid youth pitcher for the McKnight Auto-sponsored Braves (we assume on the Pony or Babe Ruth level) in Texas in 1976. On the last day of his middle-school career, Mitch tossed a seven-inning complete game in a 6-1 victory. To celebrate, he was relentlessly paddled on the behind by eager seniors with nothing better to do than cause mayhem.

Sheldon Cooper’s twin sister Missy (Raegan Revord) was a two-way threat for the Texas Thunder during Season 3 of The Big Bang Theory prequel series. Like Stephanie Tanner, she found interest in the game because of a crush and then joins the local little league after an impressive performance throwing balls at a carnival dunk tank. Missy still had to prove her worth to Coach Dale (Craig T. Nelson) and eventually became one of the team’s top pitchers. She also does not like being thrown at by opposing pitchers.

In 1991, during Season 4 of the massively popular ABC sitcom, Stephanie Tanner (Jodie Sweetin) decides to join the little league team her father Danny (the late, great Bob Saget) is coaching. Mostly because she has a crush on a boy, Brett, from a rival team. Stephanie ultimately becomes a star pitcher for Danny’s Giants and must face off in a game against Brett, who had asked Stephanie to go easy on him. She obliges, and Brett hits a home run off her. But when the game is on the line, and Brett is up again, Stephanie strikes him out following a mound visit from sister D.J.

Arguably, Kofi (Michael Perkins) is the star of Conor’s Kekambas. However, he’s a troubled youth with a hot temper that tends to get in the way. He often clashes with teammates and doesn’t always take well to instruction. That said, Kofi possesses a leadership quality that the team desperately needs. Throughout the film, Kofi might mature the most of any member on the team — both on and off the field.

The first of two key contributors for the Kekambas, an inner-city Chicago little league team coached by unsuccessful gambler Conor O’Neill (Keanu Reeves). The movie is based on a Daniel Boyle’s Hardball: A Season in the Projects, and Miles (A. Delon Ellis Jr.) might be the most interesting player on the team. He’s the team’s best pitcher, who happens to wear headphones (until the league outlaws them) with The Notorious B.I.G.’s “Big Poppa” blaring in his ears.

Simply put, Buddy the dog might be the most versatile fictional athlete in movie history. The famed Golden Retriever first captured our attention as a basketball star in Air Bud (1997). Then, he tried his hand at football in Air Bud: Golden Receiver (1998) and soccer in Air Bud: World Pup (2000). In 2002, Buddy took his act to the baseball diamond, where he went from Little League star to playing for the then-Anaheim Angels? It is Hollywood, after all.

Appearing in the Bad News Bears sequel and is played by Jimmy Baio. Carmen Ronzonni moves to California from “back East” and takes over as the Bears’ starting pitcher when they head to Texas for the game in the Astrodome. Carmen talks a big game, which is better told coming out of his mouth than his presence on the mound. Eventually, after help from new coach Mike Leak (William Devane), he finds his form. At the plate, his big hit helps the Bears to that improbable victory in the dome.

The first of several characters from the Bad News Bears franchise that we’ll highlight is the overweight, insult-spewing, funny-shirt-wearing, and Kentucky-Fried-Chicken-loving catcher of the Bears in three movies. Engelberg was played by Gary Lee Cavagnaro in the classic first installment from 1976 and cracked that improbable Joey Turner-aided inside-the-park homer back to the pitcher. Jeffrey Louis Starr then took over the part in The Bad News Bears in Breaking Training (1977) and The Bad News Bears Go to Japan (1978).

From this severely underrated 1985 NBC television summer camp comedy starring Michael J. Fox and Nancy McKeon. Bobby (Derek Googe) is a younger camper. But he’s such a talented baseball player that he’s good enough to play on Camp Pinewood’s varsity team. His shifty buddy Jerry Disbro (Joe Wright) has taken on the role of Bobby’s wannabe agent and negotiates with the camp brass for him to be justly compensated for his varsity service.

Baseball is still a popular topic when it comes to movies and television. The minor league or youth league aspect of the game generally works well with the public. So why not offer our list of favorite fictional Little Leaguers?