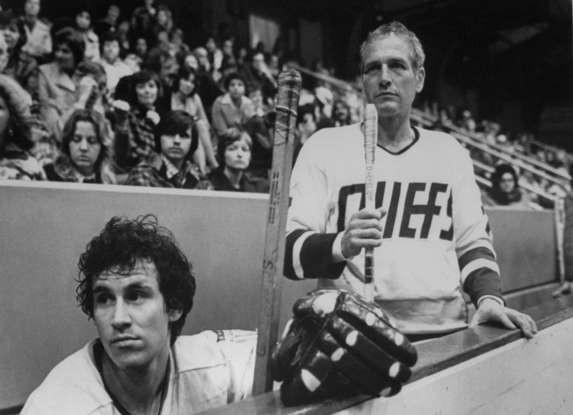 The epitome of old school. Chadwick is a hockey lifer. He’s seen it all as a player and a coach. Though he enjoyed some big-time success, Chadwick (the late Ed Lauter) seems most comfortable hanging around the bus leagues. Murray demands the best of his players and does not need to be bothered by whiners or weaklings. He’s a solid teacher of the game but doesn’t have much patience. He’s also not a fan of Dean Youngblood going out with his daughter.

The Old Bear. Burns (Burt Reynolds) is a former “college 2A” standout and also one of the more prominent judges in Alaska. We are apperceptive that he will devote his time to the club and assist Gordon Bombay. He can be a disciplinarian and takes an old-school approach to the game, but perhaps that’s what we need to keep everybody in line. We still don’t know how he feels about Stevie Weeks dating his daughter.

Much like his players with the Ducks, Bombay (Emilio Estevez) matured over time and became quite a successful hockey coach. He took a group of overachievers and turned them into winners. Now, he will have plenty of talent to work with on this club, but we think he’s fiery and strong enough to deal with all the egos. Plus, we’ve surrounded Bombay with a couple of veteran assistant coaches to help the process.

One can say Lemieux (Yvon Barrette) has a case of small man’s syndrome. He’s a hothead but also a bit misguided in his anger. He never really liked living and playing in Charlestown for the Chiefs, so maybe his play will improve with this team. Denis’s English is getting better, so at least he’s got that going for him. Lemieux is also always good for an interview when none of his teammates are available.

Hanrahan (Christopher Murney) might not be the most dependable netminder on our roster, but we can probably use him in a pinch. He also has some apparent off-ice issues, especially regarding his wife, Suzanne. We’re not sure what the relationship will be like between him and former rival-turned-teammate Reg Dunlop, but maybe they’ll just need to drop the gloves in practice to settle some old scores.

It’s quite possible that “The Cat” (Colombe Jacobsen-Derstine) will be our No. 1 goaltender. Julie might also be the smartest player on our team, on and off the ice. From her time with the Mighty Ducks and Team USA, we know “The Cat” is capable of coming through in the clutch. Gaffney is our girl when the game is on the line, and we need a big save.

Can you imagine the “Tooth Fairy” (Dwayne Johnson) standing in front of the net pushing smaller opponents away from the crease? Thompson, a cocky and ignorant enforcer, had to endure a long minor-league career before getting his shot with the Los Angeles Kings. He’s a natural forward, mostly on the wing, but since we lack depth on defense, we will make the switch and hope for the best.

Rhea (Liev Schreiber) is your typical hockey enforcer. He doesn’t care much about scoring and has little offensive prowess on the ice. However, he’s an agitator and a brute. When we need a game to change from an emotional standpoint or someone to light a collective fire under the team, “The Boss” is our guy. He might not be a blue-liner by trade, but this is where we’ll need him.

A towering figure in front of the net, “Tree” (Kevin Durand) has the potential to be an imposing presence. That said, “Tree” can sometimes be a little too passive. He does not always take advantage of his size and stature, which will be needed on the penalty kill or late in games. Maybe it’s because he’s just too nice a guy who does not want to offend anybody.

Goldberg (Shaun Weiss) began his playing career as a goalie, so if we ever need an emergency netminder, he could be the guy. In the meantime, Goldberg is expected to be a force on defense, especially when it comes to the penalty kill. Goldberg’s husky stature makes him a huge offensive obstacle in front of the net, especially when we find ourselves in those 5-on-3 situations.

“Killer” is not the most talented player on this team, but he might have the biggest heart. Carlson (Jerry Houser) is an overachiever who has to work hard for his ice time. He’s a coach’s dream and will always stick up for his teammates. He’s also not afraid to get into a donnybrook and shed some blood. Dave’s only fault might be that he does not often wear a coat when going out to start his car during heavy storms.

This wily veteran is a forward by trade, but John Biebe (Russell Crowe) will be shifted to defense on this team. He’s getting up in age and lost some of his burst, so one of our assistant captains seems better served along the blue line. Also the town sheriff in Mystery, Biebe is considered one of the greats in the history of the “Saturday Game” and someone for the young guys on the squad to emulate.

Just a teenager, Youngblood (Rob Lowe) is loaded with talent but needs a little fire and grit to complete his overall promise. Youngblood shined during his short time with the Hamilton Mustangs, but that was more than enough to make this team. Nobody is denying his scoring prowess, and now that he’s also willing to drop the gloves if needed, Youngblood has the potential to be a star. By the way, he’s also dating the daughter of another of our assistant coaches.

One of the youngest players on the team, Weeks is still a raw talent, but he’s too good to be kept off this roster. Back in Mystery, Weeks (Ryan Northcott) turned heads while “skating the river.” If there is one drawback to Weeks’ overall character is that he’s dating one of our coach’s daughters. Let’s hope that’s not a distraction.

Even the move from Minnesota, where he was regarded as one of the best junior speed skaters in the Twin Cities, to Beverly Hills did not keep Brandon (Jason Priestley) from staying off the ice. While we often did not see him at the rink in California, Walsh was quite good when we did. He’s a solid skater, an above-average passer with excellent vision, and a strong finisher.

Taymore (Jessalyn Gilsig) is a hard-working single mom in the Calgary area. Still, she enjoys some rat hockey every now and then but does not like being put down, seemingly playfully, by the guys at the rink. So, after she brought together a group of talented women to take on the men, Paula earned a spot on our club. She’s feisty and fierce, has a solid slap shot, and is always ready to throw an opponent into the boards.

Sutton (the late Patrick Swayze) was one of the best junior hockey players in the world during the mid-1980s. A pure scorer, Sutton was slated to be a high NHL draft pick until an on-ice head injury nearly ended his career. We assume we would see Sutton back on the ice if there was a Youngblood sequel. Maybe not his once-dominant self, but a serviceable member of this team nonetheless.

We took some liberty here by including all three Hanson Brothers: Jeff (Jeff Carlson), Steve (Steve Carlson), and Jack (Jack Hanson). There is no doubt this “goon” trio will be the most popular group of players on our roster. However, they will likely be healthy scratches most nights — unless we’ve got a big game against Tim McCracken, Ogie Ogilthorpe, and the rest of those Syracuse punks. When their line is called, the Hansons will have the foil on and their opponents in their sights. Plus, they will always respect the playing of the national anthem.

The legendary Dunlop (the late great Paul Newman) serves many purposes for our team. The longtime player-coach of the Charlestown Chiefs, Dunlap is the captain of our squad and likely the face of the franchise. Reg won’t shy away from a radio or television interview and should be a favorite of those sportswriters. His best days on the ice might be in the past, but Dunlop still provides plenty of value to this effort.

There was a time when Dorsey was considered the best amateur hockey player in Minnesota. However, a head injury hindered his peripheral vision and ended his hockey career. While Dorsey (D.B. Sweeney) ended up enjoying a successful career as a pairs figure skater, he might be worth a couple of shifts per game on nights when he’s not a healthy scratch. The “Minnesota Machine” still could have something left to offer.

If we’re talking about the Mighty Ducks, Conway should be considered the face of the franchise. He’s a good-hearted kid who has grown into his role as a team leader. Charlie (Joshua Jackson) is a funny kid but truly cares about his teammates. That can go a long way in the dressing room if the squad finds itself amid a rough stretch or needing a confidence boost.

Apparently, Braden (Michael Ontkean) is one of the greats in the history of the Ivy League. He’s highly intelligent but shunned the corporate world for a shot at professional hockey. He’s the most talented player on the Charlestown Chiefs but has no appetite for the club’s goonish theatrics. His dry wit and sarcastic humor should enable him to fit in well with this group.

Banks is the star of the famed “Saturday Game” in this remote Alaskan community. According to Sports Illustrated, he’s known as the “cruise missile.” Connor Banks (Michael Buie) might be the fastest player on our club. A tremendous skater in the open ice and one fine puck handler, Banks would log plenty of minutes, potentially as a top-line center. He’s also apparently a successful grocer but not a big fan of outsiders.

Banks is one of the most complete players on our team. He’s a strong two-way player who won’t necessarily draw a lot of attention to himself. Our first introduction to Banks (Vincent Larusso) sensed a bit of standoffishness, but once he accepted that his ice time would come as a member of the Mighty Ducks instead of the revered Hawks, we started to warm to the young man.

Hollywood has provided us with many memorable fictional sports moments, especially when it comes to hockey. If we were to put together a team of fictional hockey players from movies and TV, this is what it would look like.