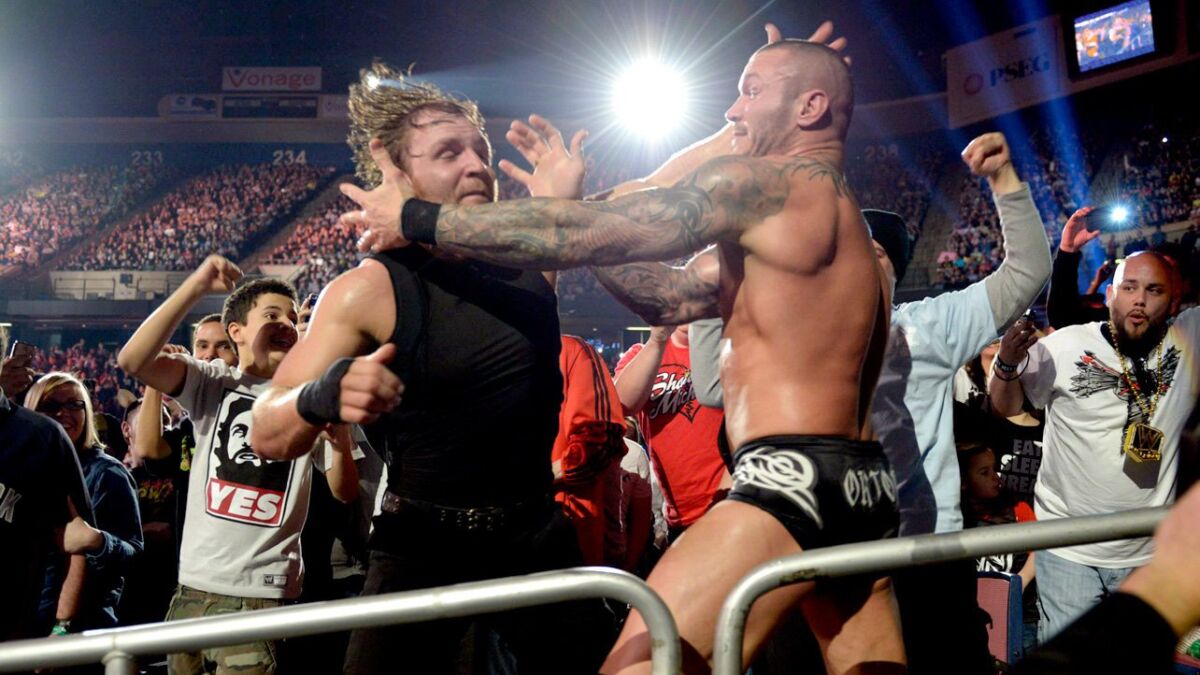 The next pay-per-view on the WWE schedule is Extreme Rules, an event that often features hardcore matches, which is precisely why this PPV is always so promising. In Extreme Rules, things really go beyond the limits!

The inaugural Extreme Rules pay-per-view took place in 2009 and since then, fans have witnessed several horrific, violent, brutal and extreme matches. Certainly, there have been disappointing fights, but there have also been incredible matches, which are worth watching. Without further ado, let’s take a look at the 14 best matches in WWE Extreme Rules history. 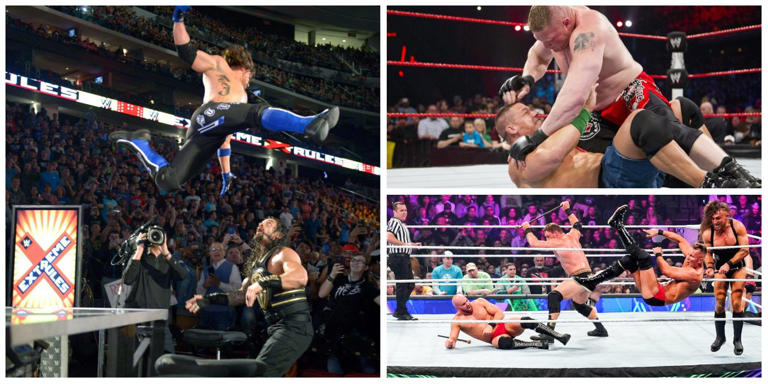 Here are the 14 Best Matches in WWE Extreme Rules History

Batista was the aggressor and he inflicted a lot of punishment on Cena. Both Batista and Cena connected with their respective finishers but they a refusal to stay down. It was a war of attrition, and Cena retained the WWE Championship after he smartly tied Batista’s feet to the ring post with duct tape.

At Extreme Rules 2012, CM Punk and Chris Jericho collided in a Chicago Street Fight for the WWE Title. Punk and Jericho put on a brutal 25-minute battle, in which they gave their best effort and kept the fans on the edge of their seats.

There were some amazing spots and the storytelling was brilliant. In addition to the excellent maneuvers, Punk and Jericho did great character work, which was pivotal in the match. In the end, the Straight Edge Superstar managed to defeat Chris Jericho and retained the title.

Asuka Vs. Sasha Banks (The Horror Show At Extreme Rules, 2020)

Asuka and Sasha Banks clashed over the Raw Women’s Championship at the COVID-19 hit edition of the Horror Show at Extreme Rules in 2020. They knocked it out of the park in unquestionably the best match of the night with Sasha aiming to become a double champion as she was one-half of the reigning WWE Women’s Tag Team Championship.

There’s no surprise that this was a competitive wrestling match with both women giving it their all. The Empress of Tomorrow blinded the referee with green mist. Bayley got involved in proceedings by taking matters into her own hands by putting on the referee’s shirt, and awarding the Boss, the Raw Women’s Championship.

This was a Ladder match in which Christian and Alberto Del Rio were willing to do anything to get the vacant World Heavyweight Title.

This bout was simply spectacular. Christian and Alberto Del Rio really put their bodies on the line in this one, both took horrifying bumps and suffered a lot of pain throughout the match. In the end, Christian prevailed and became World Heavyweight Champion for the first time in his career.

At Extreme Rules 2009, Chris Jericho and Rey Mysterio collided in a No Holds Barred Match for the Intercontinental Title. Jericho is a technical wrestler and Rey Mysterio is a luchador, but on this occasion, both looked almost like brawlers, delivering a very intense and exciting hard-hitting match.

With perfect pacing, amazing spots, and brilliant storytelling, it was an excellent match. After 14 minutes, Chris Jericho managed to defeat Rey Mysterio and became Intercontinental Champion.

Finn Balor and Edge collided in an “I Quit” match and the former World Champions told an excellent story. The WWE Hall of Famer was in his element in this type of match as he is very good at using weapons, and inflicting pain on his opponents.

Balor’s Judgment Day got involved in proceedings as did Rey Mysterio and Edge’s wife Beth Phoenix. The Glamazon found herself in a vulnerable position with Rhea Ripley in a prime position to do a con-chair-to but Edge uttered the words “I Quit” with Balor victorious.

After the bad joke at WrestleMania 28 when Sheamus defeated Daniel Bryan in just 18 seconds, they faced each other again. This time, Sheamus defended the World Heavyweight Title in a Two Out Of Three Falls Match.

This was a great match, Daniel Bryan and Sheamus did a great job, focusing on even the smallest details. The way Bryan attacked Sheamus’ shoulder mercilessly is amazing, and obviously, Sheamus’ selling is perfect. Bryan seemed to be in control, but he couldn’t capitalize on his opportunities and Sheamus ended up taking the win in epic fashion.

The Shield Vs. Evolution (Extreme Rules 2014)

Roman Reigns, Seth Rollins, and Dean Ambrose faced off against Batista, Randy Orton, and Triple H in a mind-blowing match. This match had several incredible spots, such as Seth Rollins launching himself off the balcony to clear the way for Roman Reigns, who pinned Batista for the win after hitting a powerful Spear.

The main event of Extreme Rules 2009 featured Edge defending the World Heavyweight Title against Jeff Hardy. This was one of the best Ladder matches in WWE history, and that is no wonder, as Edge and Jeff Hardy are synonymous with this stipulation.

Obviously, the match had several fantastic spots, high-flying moves, and generally terrific maneuvers. It was dramatic from start to finish. In the end, Hardy beat Edge and won gold, but the joy didn’t last, as CM Punk cashed in his Money In The Bank contract and became World Heavyweight Champion.

The match was slow-paced at first, but as the minutes went by the match got more intense and exciting, and the final stretch kept the fans on the edge of their seats. Every man involved played his part, especially Reigns and Balor, who were amazing. After nearly half an hour of combat, Samoa Joe was the one who prevailed.

In the main event of Extreme Rules 2016, Roman Reigns and AJ Styles collided in an Extreme Rules match for the WWE World Heavyweight Title.

It was an extremely intense and dramatic match, with some innovative spots and several very exciting near-falls. The fans were invested from start to finish and that was a key aspect. The storytelling was amazing and overall Reigns and Styles had excellent performances. The finish was memorable, AJ Styles performed his Phenomenal Forearm but The Big Dog countered it into a Spear to destroy Styles and retain the title.

There was always guaranteed to be fireworks when the Brawling Brutes comprised of Sheamus, Ridge Holland, and Butch and Imperium’s Intercontinental Champion Gunther, Ludwig Kaiser, and Giovanni Vinci hit a home run in the curtain-raiser at Extreme Rules 2022. They collided in a Good Old Fashioned Donnybrook match.

The intensity was there for everyone to witness with neither of these teams holding back. Kaiser hit the Celtic Warrior with a shillelagh. However, Sheamus regrouped and he put Gunther through the broadcast table with the Celtic Cross. Vinci was helpless when Holland and Butch held him with Sheamus putting him out of his misery with a Brogue Kick.

Flawless performances, jaw-dropping spots, breathtaking sequences, unbelievable near-falls, this match had it all. Maybe The Miz was a coward, but he was smart and opportunistic, and he managed to win the match and retain the title.

Extreme Rules 2012 was a fantastic PPV, with several outstanding matches, but undoubtedly this was the best. John Cena and Brock Lesnar put on a memorable show. It was an insane, brutal, and extreme match.

Cena was already bleeding shortly after the bell, and The Champ simply couldn’t handle The Beast Incarnate, who looked like a true final boss throughout the match. However, somehow Cena managed to turn things around and got the win. They told the story perfectly and the match turned out to be a classic.