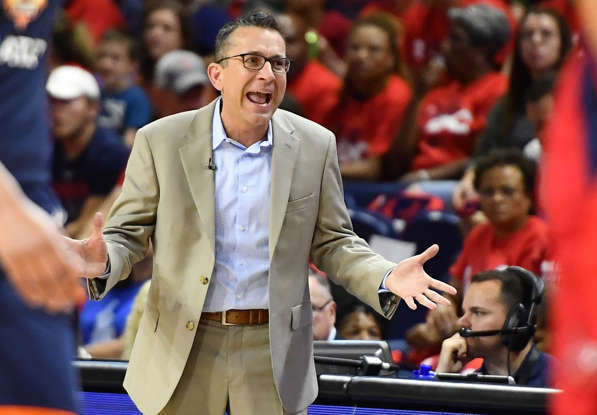 Still running things with the Minnesota Lynx, Reeve joins the aforementioned Chancellor as the only WNBA coaches to win four championships (2011, ’13, ’15, ’17). Prior to the 2022 season, which got off to a rough start for Minnesota, Reeve had endured just one losing season — her first with the Lynx in 2010. She’s the sixth to coach at least 400 WNBA games, and after posting her 270th victory in 2022, Reeve remains the winningest female coach in league history. A three-time WNBA Coach of the Year (2011, ’16 and ’20), Reeve has also won a league-high 41 playoff games through the 2021 campaign.

Beloved in Detroit for his playing days with the Pistons, where he was part of two NBA championship teams, Laimbeer enjoyed even more success as coach of the Detroit Shock. He won three WNBA titles (2003, ’06 and ’08) during parts of eight seasons with the Shock franchise, which now resides in Dallas. After that, the two-time WNBA Coach of the Year registered three 20-plus win seasons during a five-year run with New York, and coached the Las Vegas Aces to a Finals appearance in 2020. In the all-time annals of the WNBA, Laimbeer ranks second in victories while posting an impressive .577 winning percentage (306-215) as one of four with at least 500 games coached. His 37 playoff victories rank second in WNBA history.

Tied for the most all-time WNBA coaching titles, Chancellor was the guiding force in the Houston Comets’ winning the league’s first four championships (1997-2000). A three-time WNBA Coach of the Year, Chancellor spent his entire league career in Houston and coached at a time when the Comets clearly had the game’s best players — with the likes of Cynthia Cooper, Sheryl Swoopes and Tina Thompson. However, only once during his 10-year tenure running the club, during which he went 211-111, did Chancellor suffer a losing season. His 1998 squad that went 27-3 is often considered the greatest team in WNBA history.

Nobody in the history of the WNBA has coached more games or recorded more victories than Thibault, who will turn 72 in September. And, he’s not done yet while still in charge of the Washington Mystics. Thibault, who spent time as an NBA assistant with the Los Angeles Lakers, Chicago and Milwaukee before turning to the women’s game, has won more 350 games and coached over 630. Then after failing in three previous Finals’ chances with the Connecticut Sun and Mystics, Thibault finally nabbed that elusive WNBA title with Washington in 2019.

When it comes to leaving a mark on one’s profession, there aren’t many who have done it better than Agler. In addition to sitting third on the WNBA’s career wins (287) and games coached (545) lists, Agler led two different franchises to a league title — Seattle in 2010 and Los Angeles in 2016. Agler, who began his WNBA coaching career in Minnesota and concluded it in Dallas, posted six seasons with at least 20 victories. He owns a .527 regular-season winning percentage and went 24-19 in the playoffs.

Entering the 2022 season, Cooper is one of five WNBA coaches to record two or more championship. A popular guard during the “Showtime” era of the Los Angeles Lakers, Cooper’s first head-coaching gig came with the Los Angeles Sparks in 2000. One year later, the Sparks were WNBA champs under Cooper, who led them to a repeat title in 2002. Los Angeles won no fewer than 24 games in any of Cooper’s first four seasons. After resigning during the 2004 season, Cooper returned to coach the Sparks from 2007-;09, then spent four seasons in charge of the Atlanta Dream. For his WNBA career, Cooper went 230-158 during the regular season, and 27-16 in the playoffs.

Only one other person has coached more WNBA games than Hughes’ 598. During a coaching career that spanned parts of 19 seasons and four teams (Charlotte Sting, Cleveland Rockers, San Antonio Stars, Seattle Storm), Hughes won 286 games during the regular season and 22 in the playoffs. However, it wasn’t until 2018, in his first season coaching the Storm — following an 11-year run in San Antonio — that Hughes finally won an elusive WNBA title.

In the world of women’s basketball, Donovan essentially did it all. As a college star, Donovan won an AIAW national championship at Old Dominion, then two Olympic gold medals for the United States. She eventually landed in the WNBA as a coach with five different franchises (Indiana, Charlotte, Seattle, New York, Connecticut), but it was with the Storm in 2004, that she became the first female head coach to win a WNBA title. Donovan, who died of heart failure in 2018 at age 56, is one of eight WNBA coaches to win at least 200 games (206).

Before Brondello embarked on her successful WNBA coaching career, she was a WNBA All-Star (1999), who played for the Detroit Shock, Miami Sol and Seattle Storm. She began her head-coaching career in the league with San Antonio in 2010. Then after three seasons as an assistant with Los Angeles, Brondello returned to the head-coaching ranks, and in her first year with the Phoenix Mercury, guided them to the 2014 WNBA championship. The beloved Aussie spent eight seasons in Phoenix before taking over the New York Liberty in 2022. Brondello has won more than 160 regular season games.

After winning 447 games as a college coach and earning success with USA Basketball, Dunn carried over that success to the professional game. First, in the ABL, then onto the WNBA, where she was the first coach of the expansion Seattle Storm. Eventually, Dunn landed with the Indiana Fever. Where, she took that club to the WNBA Finals in her second season (2009), and coached the Fever to a league title in 2012. In addition to a coaching career that’s resulted in 168 professional wins over 334 games, Dunn has also achieved success in the front office.

Whisenant’s WNBA coaching career was spent between the defuncted Sacramento Monarchs and New York Liberty. It was with the former that Whisenant achieved his most notable success. In 2005, he coached the Monarchs to a franchise-best 25-9 record and its only WNBA championship. He took Sacramento back to the WNBA Finals in 2006, but it fell in five games to Detroit. Whisenant then landed in New York, and finished his WNBA coaching career at 119-88 — 20-14 in the playoffs.

Adubato made his name as an assistant and head coach in the NBA, notably with Detroit, Dallas and Orlando. Then, he took his knowledge to the WNBA with the New York Liberty. In his first four years guiding the Liberty, Adubato took the franchise to the WNBA Finals three times. However, he never won a title, and by 2004, was gone. Adubato coached his final three seasons with Washington, compiling a 134-116 WNBA record with 14 playoff victories.

More than 20 years after Williams debuted as a WNBA head coach with the defuncted Utah Starzz, he took over the Los Angeles Sparks when Derek Fisher was fired during this 2022 season. Thompson has coached more than 280 games and won more than 130 during his WNBA career, which also includes stops in charge at Atlanta and the Tulsa/Dallas franchise. In 2013, Williams guided the Dream to — what is to date — his only WNBA Finals appearance.

Kloppenburg began his American professional coaching career in 2000, as an assistant with Seattle Storm. However, his first WNBA head-coaching stint didn’t come until 2012, with the Tulsa Shock. Yet, Seattle has just felt like home for Kloppenburg, who returned to the Storm as an assistant to 2017, when he was later named interim head coach following Jenny Boucek’s dismissal. He also served in an interim role for the Storm in 2019, when Dan Hughes (more on him in a bit) was recovering from cancer surgery. In 2020 with Hughes still out, Kloppenburg held the head-coaching duties and guided the Storm to the league title. Kloppenburg is 43-55 as a WNBA head coach, and 6-1 in the playoffs.

We mentioned Westhead earlier in this list. He has the distinction of being the only head coach to with both a NBA and WNBA championship. Westhead accomplished the former during his first season with the Los Angeles Lakers in 1979-80, and the latter in his second and final campaign with the Phoenix Mercury. Known for his fast-paced, high-tempo offensive style dubbed “The System,” Westhead went 41-27 (7-2 in the playoffs) during his two seasons coaching the Mercury.

Another talented active coach in the league. After spending time as a college assistant and head coach coach, and on the bench with the Los Angeles Sparks, Miller became head coach of the Connecticut Sun prior to the 2016 campaign. Since then, Miller has won more 110 WNBA games, including four seasons with at least 21 victories and a 2019 appearance in the WNBA Finals.– prior to 2022. However, Miller is still searching for his first WNBA championship.

Since taking over the Chicago Sky in 2019, Wade, a former assistant with Minnesota, has enjoyed immediate personal success. He was the WNBA Coach of the Year in 2019, and guided the Sky to their first league title in 2021 — after a 16-16 regular season. As the team’s general manager, as well, Wade was also responsible for bringing Candace Parker to her hometown area in 2021. He’s already won more than 50 games and remains a rising coaching star in the league.

Another on the list of prominent WNBA coaches never to win a title. Chatman took LSU to three straight Final Fours, then after a stint coaching professionally in Russia, she returned to the United States as coach of the Chicago Sky. Though Chatman’s only WNBA Finals appearance came with the Sky in 2014, she’s in elite company with 306 games coached and 134 career victories during a career that also included her final three seasons with the Indiana Fever.

It’s safe to say that Meadors is among those considered the best WNBA coaches never to win a title. She’s one of the original eight head coaches in league history, guiding the Charlotte Sting for three seasons. Following an assistant college stint at Pittsburgh and then with the Washington Mystics, Meadors returned to the head-coaching ranks with Atlanta, where she also served as general manager. The WNBA Coach of the Year in 2009, Meadors posted a 111-119 record in the league and won eight of 20 playoff games.

Gaines is one of 15 coaches in the history of the WNBA to win a championship. His came while guiding the Phoenix Mercury in 2009. Gaines went 90-101 while coaching the Mercury from 2008-’13, but was 11-9 during the playoffs. He played and was mentored under Paul Westhead (we’ll get to him), the former Mercury coach, whom Gaines played for in college at Loyola Marymount during the mid-to-late 1980s. He would go on to serve as an NBA assistant coach with the Phoenix Suns, New York Knicks and Washington Wizards.

The Best WNBA Coaches of All Time.

The WNBA has showcased some of the greatest women’s basketball players in history. It’s also produced some of the sport’s most legendary coaches. Here are the 20 best coaches in WNBA history — ranked.

Top 13 Best WNBA Coaches of All Time (With Image)