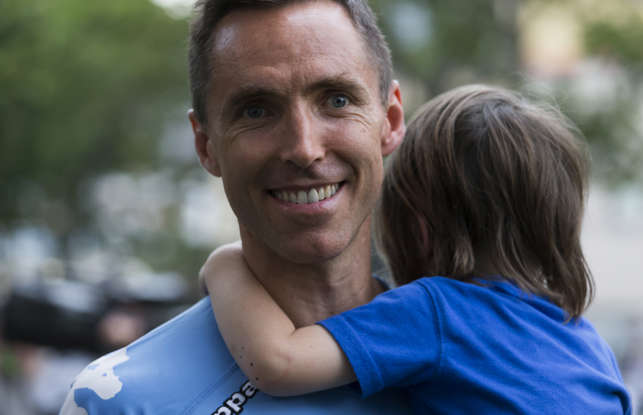 Who are the best players in the history of the National Basketball Association? If you know the game, there are probably a couple of big names you’d quickly consider for the top of the heap. But widen the field a little bit more and you can go way beyond Michael Jordan, Kobe Bryant and LeBron James.

Here’s our take on the top 20 hardwood heroes in NBA history.

One day, Michael Jordan may have to cede the title of greatest ever to LeBron James, or maybe even another challenger to the throne. For now, however, His Royal Airness rests alone as the crown prince of basketball royalty. A five-time league MVP and six-time NBA champion with the Chicago Bulls, the Hall of Fame legend boasts the highest scoring average in league history in both regular season play and the playoffs.

They call him King James, and Los Angeles Lakers star LeBron James sure boasts regal talent. A fixture in the NBA Finals in recent years, James has won four rings in his career. A four-time league MVP, 17-time All-Star, and two-time Olympic gold medallist, LBJ is unquestionably the most dominant player of his era.

A truly magical talent, Earvin ‘Magic’ Johnson helped revolutionize the point guard position, and provided the fast-break flair that made the Showtime Lakers such a wonder to watch. A five-time NBA champion and three-time MVP, Johnson’s career came to an abrupt end in 1991 after he revealed he was HIV-positive. Even so, Magic still left with the second-most triple-doubles in NBA history, behind only Oscar Robertson.

A teammate of Magic Johnson on the Los Angeles Lakers teams that dominated the NBA in the 1980s, Kareem Abdul-Jabbar played for six NBA championship teams in his long and distinguished career. Famous for his ‘skyhook’ shot, this high-scoring Hall of Fame centre set records by winning six NBA MVP awards and earning 19 All-Star selections.

In the 13 seasons he spent with the Boston Celtics, Bill Russell won a whopping 11 NBA titles and was named an All-Star a dozen times. A five-time winner of the MVP award, Russell’s shot-blocking skills were simply legendary, and his defence and rebounding abilities weren’t too shabby, either. Just as notably, the Hall of Fame hero was the first African American star in NBA history, and its first championship-winning player-coach.

The only man to score 100 points in a single NBA game, and the only one to average 50 points per game over an entire season, Hall of Fame legend Wilt Chamberlain also managed to lead the league in assists one year, showing he was more than just a relentless scoring machine. A four-time MVP, ‘Wilt the Stilt’ was also a two-time NBA champion, winning one title with his hometown Philadelphia 76ers and a second with the Los Angeles Lakers.

The first player in NBA history to average a triple-double over an entire season, Robertson racked up 181 triple-doubles in his illustrious career, far and away the highest total of all time. An NBA champion with the Milwaukee Bucks in 1971, ‘The Big O’ was a brilliant point guard who could beat you with his scoring, by setting up his teammates with assists, or by picking up a pile of rebounds. An innovative star who is credited with inventing both the head fake and the fadeaway jump shot, Robertson retired as the NBA’s career leader in both assists and made free throws.

A sharp-shooting forward who spent his entire career with the Celtics, Hall of Famer Larry Bird played on three NBA championship-winning teams during his brilliant run in Boston. A three-time MVP and 12-time All-Star, Bird is the charter member of the 50-40-90 club, a seven-man crew of stars who managed to post season-long shooting percentages of at least 50% on field goals, 40% on 3-pointers, and 90% on free throws.

Widely regarded as the finest power forward to ever play the game, Tim Duncan was named to both the All-NBA and All-Defensive teams in each of his first 13 seasons. He spent his entire 19-year career with the San Antonio Spurs, winning a pair of MVP awards and five league championships. An All-Star on 15 occasions, Duncan is one of two players in league history to win titles in three different decades.

One of the most imposing physical specimens ever in a sport that’s seen more than its fair share of giants, Shaquille O’Neal stood 7’1” and topped the scales at more than 325 pounds…sometimes way more. With Kobe Bryant by his side (sort of), Shaq won three consecutive NBA titles with the Los Angeles Lakers from 2000 to 2002. After he and Kobe split, Shaq added a fourth crown while playing with Dwyane Wade and the Miami Heat in 2006.

Kobe Bryant was a ruthless scorer who always seemed able to squeeze off a shot, no matter how tough it looked. A five-time NBA champion, Bryant retired as the third-leading scorer in league history, trailing only Kareem Abdul-Jabbar and Karl Malone.

The second-highest scorer in NBA history, Karl Malone was a dominant figure at both ends of the floor for the Utah Jazz. Nicknamed ‘The Mailman’ for his consistent delivery of quality play, Malone was incredibly durable, missing just a handful of games over his 19-year career. A two-time league MVP, he teamed with John Stockton to lead the Jazz to consecutive NBA Finals, but couldn’t get the better of Michael Jordan and the Bulls.

An aging Hakeem Olajuwon had lost some of his lustre by the time he wound up with the Toronto Raptors. But during his days with the Houston Rockets, ‘The Dream’ was a towering presence in the paint who led his team to back-to-back NBA titles in 1994 and 1995. The Nigerian-born seven-footer led the league in rebounding in two different seasons, and was a three-time leader in blocked shots. In 1994, the Hall of Fame centre became the only player in NBA history to be named MVP, defensive player of the year, and Finals MVP all in the same season.

An above-the-rim artist who excelled at throwing down spectacular soaring dunks, Julius Erving deserves a special place in the pantheon of hoops stars because his high-flying style influenced a legion of devoted followers. A two-time champion in the ABA, and league MVP in three straight seasons, ‘Dr. J’ went on to win a third title and a fourth MVP award after joining the NBA’s Philadelphia 76ers.

They called him ‘Mr. Clutch’ in honour of his ability to hit big shots in big games. But Jerry West was also immortalized in another way: his silhouette was used for the NBA logo. A 14-time All-Star in his career with the Los Angeles Lakers, West played in nine NBA Finals but only won once, capturing his lone championship in 1972. He’s also the only player to be named Finals MVP despite ending up on the losing side, a feat he achieved in 1969.

Hall of Famer Moses Malone won his only NBA title with the Philadelphia 76ers in 1983, the same season he also won MVP and Finals MVP honours. One of eight players to win three MVP awards, Malone was a legendary rebounder known as ‘The Chairman of the Boards.’ He posted league-leading rebounding numbers in six different seasons, including five straight at one stretch, and retired with the most offensive rebounds in basketball history.

Charles Barkley is one of six players in NBA history to score at least 20,000 points, grab 10,000 rebounds, and dish out 4,000 assists. To some, he was Sir Charles. To others, he was better known as ‘The Round Mound of Rebound.’ An 11-time All-Star, Barkley was named MVP in 1993, when his Phoenix Suns lost to Michael Jordan’s Chicago Bulls in the NBA Finals. A two-time Olympic gold medal winner and Hall of Famer, Barkley wasn’t the tallest player on the court, but had more than enough strength and agility to beat opponents to the ball.

This long-range assassin is still very active, with plenty of years still to come in what has already been an astonishing career. Considered by some to be the greatest shooter the game has ever seen, Golden State Warriors guard Stephen Curry established an NBA record by making 402 3-point shots in the 2015-16 season. That outstanding performance earned Curry a unanimous selection as league MVP. And that was his second act! The year before, Curry won MVP honours while leading the Warriors to their first NBA championship in four decades.

The highest-scoring foreign player in NBA history, German Dirk Nowitzki was the first European player to start the NBA All-Star game, and the first to win an NBA MVP award. One of a select group of six players to break the 30,000-point plateau in career scoring, Nowitzki led the Dallas Mavericks to their first NBA championship in 2011. A seven-footer who is also an exceptional shooter, Nowitzki’s effectiveness and versatility from outside the paint helped usher in a game-wide change in big man play.

Other players may have put up bigger scoring and rebounding totals, or played more imposing defence. But very few have done what Steve Nash did: engineer a highly entertaining high-octane offence while managing to effectively involve all his teammates. A two-time MVP who never won a league championship, the Canadian point guard retired with the third-highest assist total in NBA history. He’s also the only four-time member of the 50-40-90 club (a seven-man group of stars who had season-long shooting percentages of at least 50% on field goals, 40% on 3-pointers, and 90% on free throws).

The best NBA players of all time

Who are the best players in the history of the National Basketball Association? If you know the game, there are probably a couple of big names you’d quickly consider for the top of the heap. But widen the field a little bit more and you can go way beyond Michael Jordan, Kobe Bryant and LeBron James.

Top 11 NBA Players of All Time (With Image)