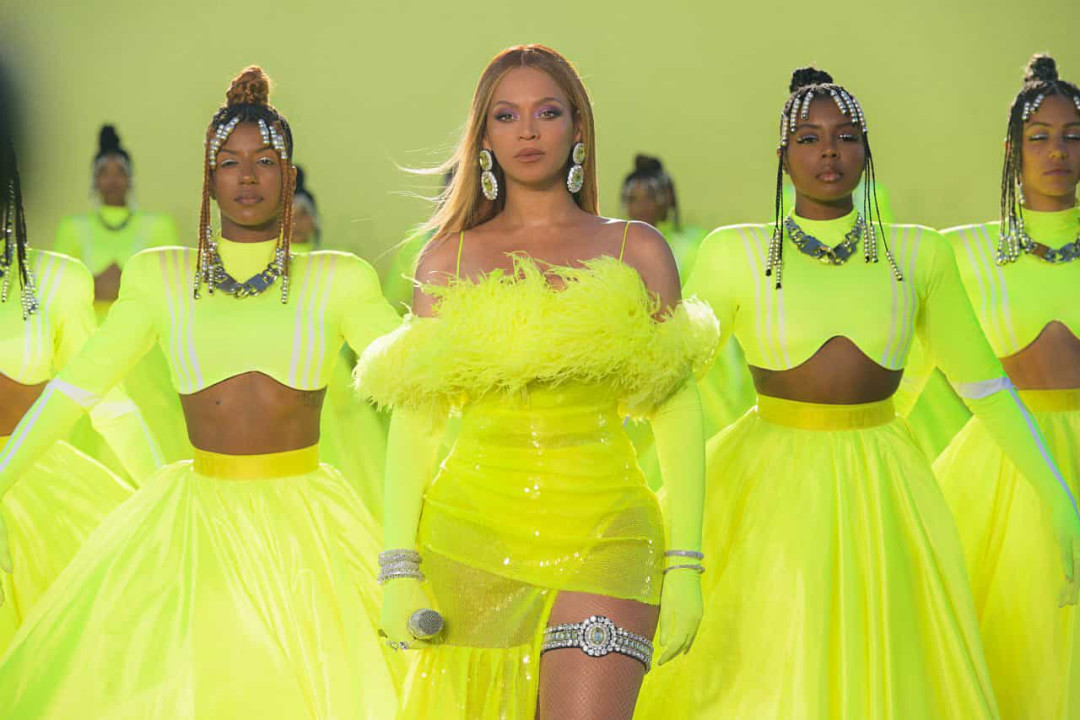 Best Dance Songs of All Time: I Feel Love, Break My Soul, Good Times, One More Time, Blinding Lights, We Found Love, In da Club, Just Dance, Stayin’ Alive, Hips Don’t Lie, Can’t Get You Out of My Head and more

If you think of a good dance song, it probably got you moving in all kinds of places, from your kitchen to the clubs. And while you can dance to literally anything, there are some songs that are true dance classics. From timeless disco tunes to modern electric pop, these hits got everyone moving in an explosion of joyful, fevered dancing

If you want to create the ultimate party playlist, be sure to include the bangers in the following gallery. Going back nearly 50 years and also including hits of today, you’re guaranteed to get everyone in the mood. Just press play and dance the night away!

Here are The Top 55+ Best Dance Songs of All Time

A collaboration between Donna Summer and her producers, Giorgio Moroder and Pete Bellotte, ‘I Feel Love’ is one of the most popular songs in dance music. Aimed to create a futuristic mood, the song has remained timeless.

The lead single from Beyoncé’s seventh album, ‘Renaissance,’ ‘Break My Soul’ is a dance-pop and house track. It topped the charts in many countries upon its release. But we wouldn’t expect anything else from Bey.

‘Good Times’ is one of disco’s greatest party anthems, and still gets everyone out on the dance floor. The lyrics never become bland, and the bass line is just insane.

Daft Punk showed the world that techno and house could have pop appeal as well. One of their most beloved tracks, ‘One More Time’ turned the French duo into two of the most unlikely stars in music history.

An ’80s-inspired track, ‘Blinding Lights’ has a synth shimmer that manages to feel old school and contemporary at the same time.

In 2011, Rihanna paired up with British producer Calvin Harris, creating the ultimate EDM hit. ‘We Found Love’ went to number one in the US for 10 weeks.

An LGBTQ anthem, ‘I’m Coming Out’ was written by Nile Rodgers and Bernard Edwards after they went out to a drag bar in New York. There they noticed several Diana Ross impersonators and understood how the community admired her. It just had to be her song.

For anyone who felt too cool to sing ‘Happy Birthday,’ this tune was probably your b-day jam. Released in 2003, this iconic track is an obvious choice for any party.

The lead single from Gaga’s debut studio album ‘The Fame,’ no party playlist would be complete without the track that redefined dance-pop.

The multiplatinum disco anthem has an insanely infectious groove that we still love decades later. Not bad for a song about survival on the mean streets of New York in the 1970s.

This 2006 jam gets everyone’s hips moving, from start till finish. With a globally-influenced beat, the song combines salsa and reggaeton with bilingual lyrics.

Michael Jackson’s first adult solo hit is one of the disco era’s most emblematic songs. Written by him, ‘Don’t Stop ’Til You Get Enough’ is a masterpiece, filled with groove and sensuality.

One of the defining club anthems of the 21st century, Kylie Minogue’s ‘Can’t Get You Out of My Head’ goes down in history as pop perfection.

Dua Lipa claimed her space as a pop A-lister with her 2020 album ‘Future Nostalgia.’ ‘Don’t Start Now,’ the album’s lead single, is the definitive breakup song to dance to.

With a funk bass line, a hand-clapping refrain, and an unforgettable chorus, this dance floor track makes it hard to sit still. And why would you with that beat?

Inspired by the Black drag balls of Harlem, ‘Vogue’ was and still is an irresistible dance anthem. At its release in 1990, it became the best-selling single in the world, selling over six million copies.

A declarative prediction to party like there’s no tomorrow, ‘1999’ will get even the dullest party popping. It’s truly a timeless jam.

There’s nothing like a heartbreak song on the dance floor. A running theme in pop, few songs have combined groove power and bittersweet emotion like Robyn’s ‘Dancing on My Own.’

After leaving her band The Sugarcubes, Björk took over the dance floor with this house-influenced track. The song helped boost her popularity worldwide.

This immortal jam embodies a carefree, upbeat, and exuberant emotion that just lifts our moods. It’s truly an ’80s dance-floor masterpiece for the ages.

The single that established Chaka Khan’s solo career from the group Rufus, ‘I’m Every Woman’ is a disco anthem that celebrates womanhood.

The debut single of the iconic Spice Girls, ‘Wannabe’ is a fearless statement that addresses the value of female friendships. Total girl power!

‘Get on the Good Foot’ basically changed the way people danced. The song’s crafty polyrhythms inspired an intricate movement dubbed the Good Foot, which would soon become known as breakdancing.

Whether you’re on the dance floor or cleaning your kitchen, this head-turning hit will definitely get you grooving. Based on heavy bhangra elements, a popular genre from Punjab, India, this song is truly a masterpiece.

There’s nothing like dancing to this ’80s jam as you belt out the lyrics with all the passion in the world. It was cool then, and it’s certainly cool today.

You perhaps danced to this one while longing for your summertime crush. Pop perfection, this 2012 hit made Canada’s Carly Rae Jepsen a household name.

In the summer of ’74, this smooth classic reached number one on the Billboard Hot 100. ‘Rock Your Baby’ was George McCrae’s debut single. Not bad!

Kesha’s debut single, any club or house party in 2009 blasted this banger. The message was clear: just pour some Jack Daniels, and don’t sleep until the sun comes up.

MC Hammer’s signature song, there’s nothing that will get a dance party going like this track. Just throw on some baggy pants and you’re good to go!

Some songs are just pure joy, and ‘Wake Me Up Before You Go-Go’ is one of them. Written and produced by George Michael, this dance-pop jam screams 1980s.

Co-written by all four, ‘Get Lucky’ is a house-inspired disco, funk, and pop track that gets you dancing immediately. The song reached number one in several countries, including Daft Punk’s native France.

There’s just something about EDM and rap mixed together, and LMFAO got us all dancing to it. Plus, the song features the unforgettable phrase: ‘Every day I’m shufflin.’

One of the all-female rap crew’s biggest hits, there’s only one thing you can do when it plays: hit the dance floor and work up a sweat!

Probably one of the least likely hits of all time, ‘Gangnam Style’ proved us wrong. The Korean hit became a worldwide success, complete with a pony-gallop signature dance.

The fourth collaboration between Bruno Mars and Mark Ronson, this song never gets old. Play this jam for some guaranteed funky grooves.

‘Levels’ is a progressive house song by the late DJ Avicii. Released in 2011, the song is a feel-good, fist-pumping anthem that gets everyone moving.

The number one dance hit in the US in 1982, ‘It’s Raining Men’ is the ultimate dance track. Who hasn’t danced to this singing about different types of men?

A seamless blend of crunk and R&B, ‘Yeah’ earned its status as an eternal party starter. Which is also thanks to Lil Jon’s signature outbursts.

A group of proudly gay walking stereotypes who sing cheesy anthems—how could you not love the Village People? ‘Y.M.C.A.’ remains a classic to this day.

At the peak of EDM, Britney Spears came out with this apocalyptic party anthem. Written by Kesha, Alexander Kronlund, Dr. Luke, and Max Martin, it just had to be a success.

A disco anthem, this timeless song describes the discovery of personal strength following a breakup. Let’s be honest: who has never danced this after a heartbreak?

Released in 1990 as their debut single, the song reached number one around the world. Today, it’s considered a classic of its genre.

The first-ever out gay pop star, Sylvester’s breakout hit was revolutionary in every way. Considered by critics as one of the best songs ever made, it’s both culturally and aesthetically significant.

Everyone was dancing to this synth-pop jam in the mid ’80s. The song’s lyrics focus on class and the pressures of inner-city life.

A blend of the subgenres of the time (new wave, funk, disco, and reggae), Grace Jones certainly made an impact with this infectious track. But due to its sexually suggestive lyrics, mainstream radio banned it.

A true disco classic, ‘Get Down Tonight’ became widely successful. Having the ultimate formula of pliant rhythms and catchy chants, it reached number one around the world.

Written and produced by Nile Rodgers and Bernard Edwards of the band Chic, ‘We Are Family’ became Sister Sledge’s most commercially successful song.

A synth-pop version of the Gloria Jones hit, mixed with a classic by The Supremes, this new wave banger has hypnotized dance floors ever since.

A swirling dance-floor epic, ‘Don’t Leave Me This Way’ is a Motown classic that achieved great commercial success. And rightfully so!

At a time when there wasn’t any mainstream dubstep, Skrillex changed that thanks to his track ‘Scary Monsters and Nice Sprites.’

Released in 1997, this rave banger became The Prodigy’s first international hit. Who would have guessed that from a track that came about while messing around in the studio?

Skeptics doubted techno could have the same power of old-school rock and roll. But then came this duo from Manchester. Combining techno squelch and hip-hop breaks, ‘Chemical Beats’ became one of the transformative sounds of the ’90s.

The Parisian producer’s epic collaboration with rapper Lil Jon became a viral hit. A pop culture phenomena, this track came to give EDM a dose of energy.

This international hit is by the British R&B band Soul II Soul saw them win their first Grammy Award for Best R&B Performance by a Duo or Group with Vocal.

The Swedish duo’s synthed-up jam made it to the top of the charts and the dance floors in 2012. Crank it up, and dance the night away!

With a catchy drumbeat and a psychedelic feel, it’s no wonder this song became a massive hit in 1989. The Belgian group pretty much kick-started mainstream hip-house music.

A mix between electronica and tropical music, the Colombian band came out with ‘Fuego’ in 2008. The catchy track helped them reach international success, contributing to alternative world music.

The biggest selling UK single of 1981, ‘Don’t You Want Me’ is a synth pop success. It’s the band’s best known and most commercially successful song.

A collaboration between New Yorker Azealia Banks and Belgian DJ duo Lazy Jay, ‘212’ is the ultimate mix of house music and hip hop. The song also showed the world Banks’ talent as a rapper. [Sources: (Rolling Stone) (Time Out)]

If you want to create the ultimate party playlist, be sure to include the bangers in the following gallery. Going back nearly 50 years and also including hits of today, you’re guaranteed to get everyone in the mood. Just press play and dance the night away!