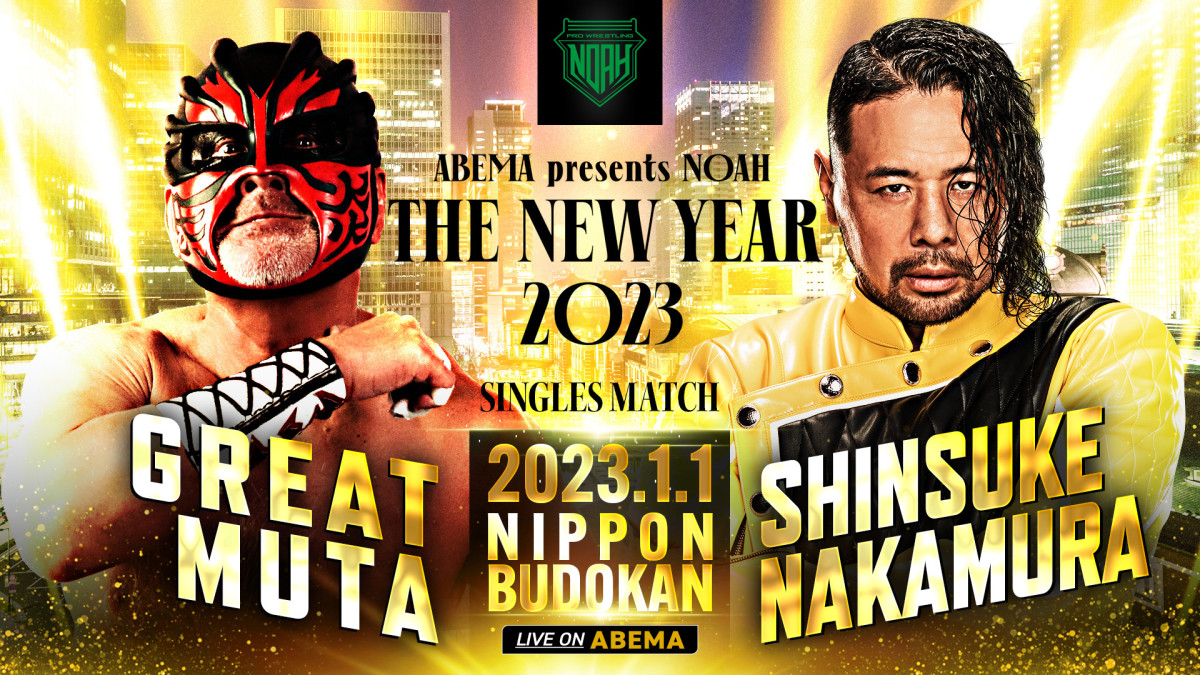 Shinsuke Nakamura from WWE is going to be wrestling at the upcoming NOAH The New Year 2023 as part of The Great Muta’s retirement tour.

It is very rare to see a contracted WWE superstar wrestling on another company’s show, but it’s going to happen on January 1st, 2023 when Shinsuke Nakamura will face the legendary Gret Muta at NOAH’s The New Year 2023 event. It will take place at Budokan Hall in Tokyo, Japan. The match was announced by Prowrestling NOAH on Twitter on Sunday morning.

The much talked about “forbidden door” in pro wrestling has not involved WWE very often, but it is now. This is not a case of Nakamura leaving WWE. He is still under WWE contract.

The 59-year-old Great Muta (Keiji Muto) is on a retirement tour. In June 2022, Muta announced he would retire from wrestling in 2023.

Muta made a surprise appearance at the AEW Rampage Grand Slam event on September 23rd saving Sting from The House of Black. Muta will team with Sting in Yokohama, Japan after NOAH released this statement.

“We are pleased to announce the participation of AEW superstar and international pro wrestling legend Sting at the GREAT MUTA FINAL “BYE-BYE” event, which will be held on Sunday, January 22, 2023 in Yokohama. It was The Great Muta who came to the unexpected rescue of Sting On AEW Rampage: Grand Slam this week. This incident triggered him to partner with Sting at the Yokohama Arena event.”

Nakamura is a Japanese wrestling legend that had a lot of success in New Japan Pro Wrestling prior to signing with WWE in 2016. Nakamura is a former three-time IWGP Heavyweight Champion, five-time IWGP Intercontinental Champion, and one-time IWGP Tag Team Champion. Nakamura also wrestled at some NOAH shows in his career.

In early 2016, Nakamura signed with WWE. His first match in WWE at NXT Takeover Dallas during WrestleMania 32 weekend is considered one of the greatest matches of his career. Nakamura went on to be a two-time NXT Champion and he won the 2018 Royal Rumble. Nakamura has had a lot of main roster success as well as a former two-time Intercontinental Champion, two-time US Champion and a Smackdown Tag Team Champion with Cesaro.

On the October 28th edition of Smackdown, Nakamura teamed up with Hit Row to defeat Legado del Fantasma in a six-man tag team match.